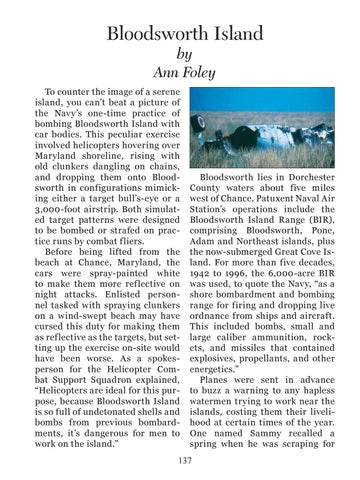 To counter the image of a serene island, you can’t beat a picture of the Navy’s one-time practice of bombing Bloodsworth Island with car bodies. This peculiar exercise involved helicopters hovering over Maryland shoreline, rising with old clunkers dangling on chains, and dropping them onto Bloodsworth in configurations mimicking either a target bull’s-eye or a 3,000-foot airstrip. Both simulated target patterns were designed to be bombed or strafed on practice runs by combat f liers. Before being lifted from the beach at Chance, Maryland, the cars were spray-painted white to make them more ref lective on night attacks. Enlisted personnel tasked with spraying clunkers on a wind-swept beach may have cursed this duty for making them as ref lective as the targets, but setting up the exercise on-site would have been worse. As a spokesperson for the Helicopter Combat Support Squadron explained, “Helicopters are ideal for this purpose, because Bloodsworth Island is so full of undetonated shells and bombs from previous bombardments, it’s dangerous for men to work on the island.”

Bloodsworth lies in Dorchester County waters about five miles west of Chance. Patuxent Naval Air Station’s operations include the Bloodsworth Island Range (BIR), comprising Bloodsworth, Pone, Adam and Northeast islands, plus the now-submerged Great Cove Island. For more than five decades, 1942 to 1996, the 6,000-acre BIR was used, to quote the Navy, “as a shore bombardment and bombing range for firing and dropping live ordnance from ships and aircraft. This included bombs, small and large caliber ammunition, rockets, and missiles that contained explosives, propellants, and other energetics.” Planes were sent in advance to buzz a warning to any hapless watermen trying to work near the islands, costing them their livelihood at certain times of the year. One named Sammy recalled a spring when he was scraping for