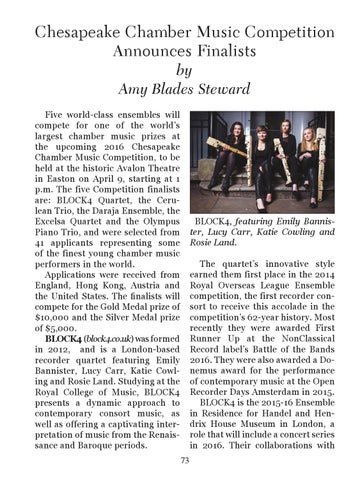 Chesapeake Chamber Music Competition Announces Finalists by Amy Blades Steward Five world-class ensembles will compete for one of the world’s largest chamber music prizes at the upcoming 2016 Chesapeake Chamber Music Competition, to be held at the historic Avalon Theatre in Easton on April 9, starting at 1 p.m. The five Competition finalists are: BLOCK4 Quartet, the Cerulean Trio, the Daraja Ensemble, the Excelsa Quartet and the Olympus Piano Trio, and were selected from 41 applicants representing some of the finest young chamber music performers in the world. Applications were received from England, Hong Kong, Austria and the United States. The finalists will compete for the Gold Medal prize of $10,000 and the Silver Medal prize of $5,000. BLOCK4 (block4.co.uk) was formed in 2012, and is a London-based recorder quartet featuring Emily Bannister, Lucy Carr, Katie Cowling and Rosie Land. Studying at the Royal College of Music, BLOCK4 presents a dynamic approach to contemporary consort music, as well as offering a captivating interpretation of music from the Renaissance and Baroque periods.

BLOCK4, featuring Emily Bannister, Lucy Carr, Katie Cowling and Rosie Land. The quartet’s innovative style earned them first place in the 2014 Royal Overseas League Ensemble competition, the first recorder consort to receive this accolade in the competition’s 62-year history. Most recently they were awarded First Runner Up at the NonClassical Record label’s Battle of the Bands 2016. They were also awarded a Donemus award for the performance of contemporary music at the Open Recorder Days Amsterdam in 2015. BLOCK4 is the 2015-16 Ensemble in Residence for Handel and Hendrix House Museum in London, a role that will include a concert series in 2016. Their collaborations with 73