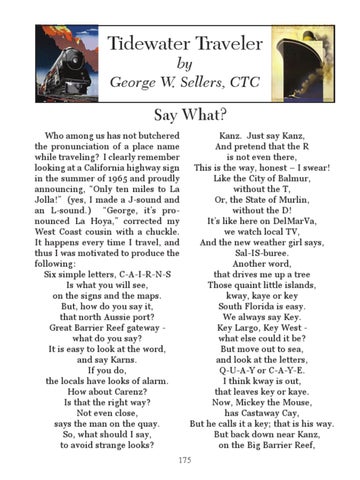 Say What? Who among us has not butchered the pronunciation of a place name while traveling? I clearly remember looking at a California highway sign in the summer of 1965 and proudly announcing, “Only ten miles to La Jolla!” (yes, I made a J-sound and an L-sound.) “George, it’s pronounced La Hoya,” corrected my West Coast cousin with a chuckle. It happens every time I travel, and thus I was motivated to produce the following: Six simple letters, C-A-I-R-N-S Is what you will see, on the signs and the maps. But, how do you say it, that north Aussie port? Great Barrier Reef gateway what do you say? It is easy to look at the word, and say Karns. If you do, the locals have looks of alarm. How about Carenz? Is that the right way? Not even close, says the man on the quay. So, what should I say, to avoid strange looks?

Kanz. Just say Kanz, And pretend that the R is not even there, This is the way, honest – I swear! Like the City of Balmur, without the T, Or, the State of Murlin, without the D! It’s like here on DelMarVa, we watch local TV, And the new weather girl says, Sal-IS-buree. Another word, that drives me up a tree Those quaint little islands, kway, kaye or key South Florida is easy. We always say Key. Key Largo, Key West what else could it be? But move out to sea, and look at the letters, Q-U-A-Y or C-A-Y-E. I think kway is out, that leaves key or kaye. Now, Mickey the Mouse, has Castaway Cay, But he calls it a key; that is his way. But back down near Kanz, on the Big Barrier Reef,