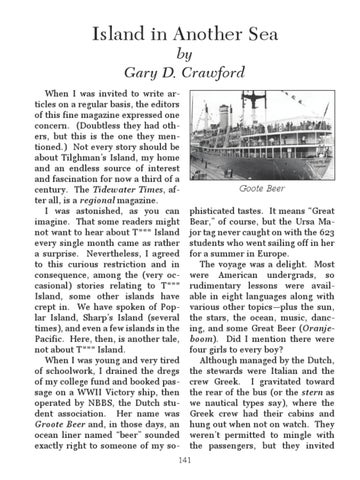 Island in Another Sea by Gary D. Crawford

When I was invited to write articles on a regular basis, the editors of this fine magazine expressed one concern. (Doubtless they had others, but this is the one they mentioned.) Not every story should be about Tilghman’s Island, my home and an endless source of interest and fascination for now a third of a century. The Tidewater Times, after all, is a regional magazine. I was astonished, as you can imagine. That some readers might not want to hear about T*** Island every single month came as rather a surprise. Nevertheless, I agreed to this curious restriction and in consequence, among the (very occasional) stories relating to T*** Island, some other islands have crept in. We have spoken of Poplar Island, Sharp’s Island (several times), and even a few islands in the Pacific. Here, then, is another tale, not about T*** Island. When I was young and very tired of schoolwork, I drained the dregs of my college fund and booked passage on a WWII Victory ship, then operated by NBBS, the Dutch student association. Her name was Groote Beer and, in those days, an ocean liner named “beer” sounded exactly right to someone of my so-

Goote Beer phisticated tastes. It means “Great Bear,” of course, but the Ursa Major tag never caught on with the 623 students who went sailing off in her for a summer in Europe. The voyage was a delight. Most were American undergrads, so rudimentary lessons were available in eight languages along with various other topics—plus the sun, the stars, the ocean, music, dancing, and some Great Beer (Oranjeboom). Did I mention there were four girls to every boy? Although managed by the Dutch, the stewards were Italian and the crew Greek. I gravitated toward the rear of the bus (or the stern as we nautical types say), where the Greek crew had their cabins and hung out when not on watch. They weren’t permitted to mingle with the passengers, but they invited