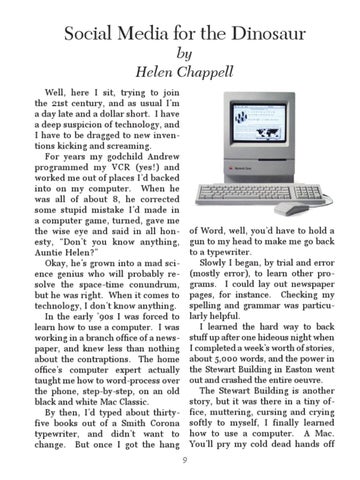 Social Media for the Dinosaur by Helen Chappell

Well, here I sit, trying to join the 21st century, and as usual I’m a day late and a dollar short. I have a deep suspicion of technology, and I have to be dragged to new inventions kicking and screaming. For years my godchild Andrew programmed my VCR (yes!) and worked me out of places I’d backed into on my computer. When he was all of about 8, he corrected some stupid mistake I’d made in a computer game, turned, gave me the wise eye and said in all honesty, “Don’t you know anything, Auntie Helen?” Okay, he’s grown into a mad science genius who will probably resolve the space-time conundrum, but he was right. When it comes to technology, I don’t know anything. In the early ’90s I was forced to learn how to use a computer. I was working in a branch office of a newspaper, and knew less than nothing about the contraptions. The home office’s computer expert actually taught me how to word-process over the phone, step-by-step, on an old black and white Mac Classic. By then, I’d typed about thirtyfive books out of a Smith Corona typewriter, and didn’t want to change. But once I got the hang

of Word, well, you’d have to hold a gun to my head to make me go back to a typewriter. Slowly I began, by trial and error (mostly error), to learn other programs. I could lay out newspaper pages, for instance. Checking my spelling and grammar was particularly helpful. I learned the hard way to back stuff up after one hideous night when I completed a week’s worth of stories, about 5,000 words, and the power in the Stewart Building in Easton went out and crashed the entire oeuvre. The Stewart Building is another story, but it was there in a tiny office, muttering, cursing and crying softly to myself, I finally learned how to use a computer. A Mac. You’ll pry my cold dead hands off 9