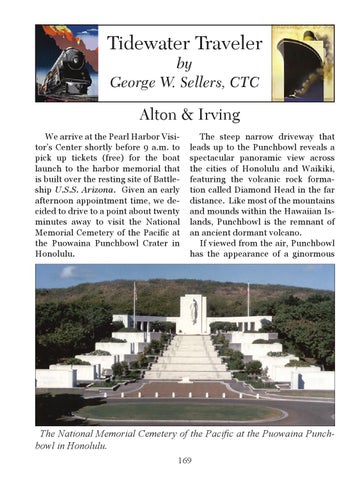 Alton & Irving We arrive at the Pearl Harbor Visitorâ&#x20AC;&#x2122;s Center shortly before 9 a.m. to pick up tickets (free) for the boat launch to the harbor memorial that is built over the resting site of Battleship U.S.S. Arizona. Given an early afternoon appointment time, we decided to drive to a point about twenty minutes away to visit the National Memorial Cemetery of the Pacific at the Puowaina Punchbowl Crater in Honolulu.

The steep narrow driveway that leads up to the Punchbowl reveals a spectacular panoramic view across the cities of Honolulu and Waikiki, featuring the volcanic rock formation called Diamond Head in the far distance. Like most of the mountains and mounds within the Hawaiian Islands, Punchbowl is the remnant of an ancient dormant volcano. If viewed from the air, Punchbowl has the appearance of a ginormous

The National Memorial Cemetery of the Pacific at the Puowaina Punchbowl in Honolulu. 169