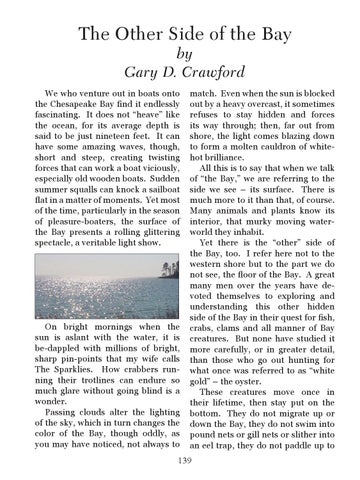 The Other Side of the Bay by Gary D. Crawford

We who venture out in boats onto the Chesapeake Bay find it endlessly fascinating. It does not “heave” like the ocean, for its average depth is said to be just nineteen feet. It can have some amazing waves, though, short and steep, creating twisting forces that can work a boat viciously, especially old wooden boats. Sudden summer squalls can knock a sailboat flat in a matter of moments. Yet most of the time, particularly in the season of pleasure-boaters, the surface of the Bay presents a rolling glittering spectacle, a veritable light show.

On bright mornings when the sun is aslant with the water, it is be-dappled with millions of bright, sharp pin-points that my wife calls The Sparklies. How crabbers running their trotlines can endure so much glare without going blind is a wonder. Passing clouds alter the lighting of the sky, which in turn changes the color of the Bay, though oddly, as you may have noticed, not always to

match. Even when the sun is blocked out by a heavy overcast, it sometimes refuses to stay hidden and forces its way through; then, far out from shore, the light comes blazing down to form a molten cauldron of whitehot brilliance. All this is to say that when we talk of “the Bay,” we are referring to the side we see – its surface. There is much more to it than that, of course. Many animals and plants know its interior, that murky moving waterworld they inhabit. Yet there is the “other” side of the Bay, too. I refer here not to the western shore but to the part we do not see, the floor of the Bay. A great many men over the years have devoted themselves to exploring and understanding this other hidden side of the Bay in their quest for fish, crabs, clams and all manner of Bay creatures. But none have studied it more carefully, or in greater detail, than those who go out hunting for what once was referred to as “white gold” – the oyster. These creatures move once in their lifetime, then stay put on the bottom. They do not migrate up or down the Bay, they do not swim into pound nets or gill nets or slither into an eel trap, they do not paddle up to