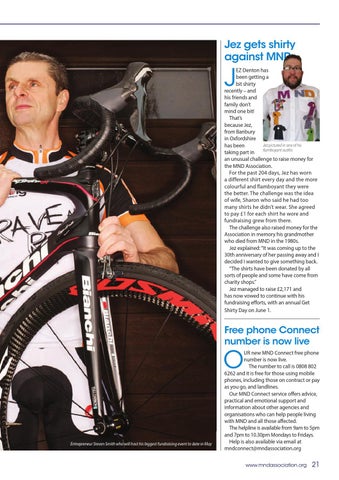 Jez gets shirty against MND

EZ Denton has been getting a bit shirty recently – and his friends and family don’t mind one bit! That’s because Jez, from Banbury in Oxfordshire Jez pictured in one of his has been flamboyant outfits taking part in an unusual challenge to raise money for the MND Association. For the past 204 days, Jez has worn a different shirt every day and the more colourful and flamboyant they were the better. The challenge was the idea of wife, Sharon who said he had too many shirts he didn’t wear. She agreed to pay £1 for each shirt he wore and fundraising grew from there. The challenge also raised money for the Association in memory his grandmother who died from MND in the 1980s. Jez explained: “It was coming up to the 30th anniversary of her passing away and I decided I wanted to give something back. “The shirts have been donated by all sorts of people and some have come from charity shops.” Jez managed to raise £2,171 and has now vowed to continue with his fundraising efforts, with an annual Get Shirty Day on June 1.

UR new MND Connect free phone number is now live. The number to call is 0808 802 6262 and it is free for those using mobile phones, including those on contract or pay as you go, and landlines. Our MND Connect service offers advice, practical and emotional support and information about other agencies and organisations who can help people living with MND and all those affected. The helpline is available from 9am to 5pm and 7pm to 10.30pm Mondays to Fridays. Help is also available via email at mndconnect@mndassociation.org www.mndassociation.org

Inside the Spring edition of Thumb Print: Support when you want to get away Our feature will give you the advice you need to go on holiday this summer So what is MND anyway? Introducing our new guide for young people Your silence will make our voice louder Sign up to Silence Speaks today! The Association needs you! Read trustee Janis Park’s story and find out how to get involved Singer with MND releases fundraising album Read Trish Abey’s amazing story Champion the Charter today How you can get your council to sign up 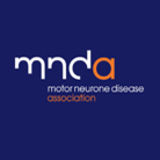