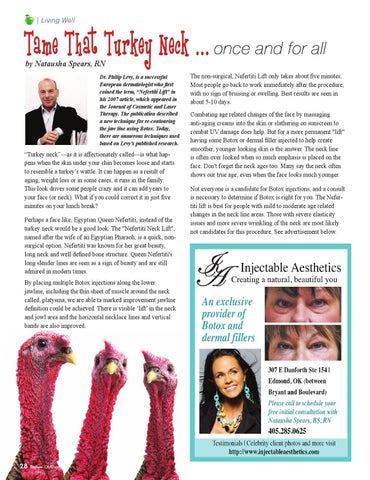 by Natausha Spears, RN Dr. Philip Levy, is a successful European dermatologist who first coined the term, “Nefertiti Lift” in his 2007 article, which appeared in the Journal of Cosmetic and Laser Therapy. The publication described a new technique for re-contouring the jaw line using Botox. Today, there are numerous techniques used based on Levy’s published research.

“Turkey neck”—as it is affectionately called—is what happens when the skin under your chin becomes loose and starts to resemble a turkey’s wattle. It can happen as a result of aging, weight loss or in some cases, it runs in the family. This look drives some people crazy and it can add years to your face (or neck). What if you could correct it in just five minutes on your lunch break? Perhaps a face like, Egyptian Queen Nefertiti, instead of the turkey neck would be a good look. The "Nefertiti Neck Lift", named after the wife of an Egyptian Pharaoh, is a quick, nonsurgical option. Nefertiti was known for her great beauty, long neck and well defined bone structure. Queen Nefertiti's long slender lines are seen as a sign of beauty and are still admired in modern times. By placing multiple Botox injections along the lower jawline, including the thin sheet of muscle around the neck called, platysma, we are able ta marked improvement jawline definition could be achieved. There is visible ‘lift’ in the neck and jowl area and the horizontal necklace lines and vertical bands are also improved.

The non-surgical, Nefertiti Lift only takes about five minutes. Most people go back to work immediately after the procedure, with no sign of bruising or swelling. Best results are seen in about 5-10 days. Combating age related changes of the face by massaging anti-aging creams into the skin or slathering on sunscreen to combat UV damage does help. But for a more permanent "lift" having some Botox or dermal filler injected to help create smoother, younger looking skin is the answer. The neck line is often over looked when so much emphasis is placed on the face. Don't forget the neck ages too. Many say the neck often shows our true age, even when the face looks much younger. Not everyone is a candidate for Botox injections, and a consult is necessary to determine if Botox is right for you. The Nefertiti lift is best for people with mild to moderate age related changes in the neck line areas. Those with severe elasticity issues and more severe wrinkling of the neck are most likely not candidates for this procedure. See advertisement below. 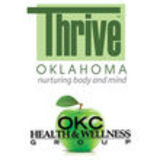 Thrive Oklahoma Health offers up holiday wellness including how to Navigate the buffet |budget for a BIG gift + great holiday recipes by Ch...

Thrive Oklahoma Health offers up holiday wellness including how to Navigate the buffet |budget for a BIG gift + great holiday recipes by Ch...