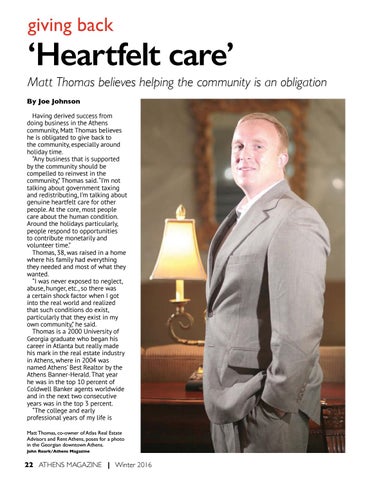 ‘Heartfelt care’ Matt Thomas believes helping the community is an obligation By Joe Johnson Having derived success from doing business in the Athens community, Matt Thomas believes he is obligated to give back to the community, especially around holiday time. “Any business that is supported by the community should be compelled to reinvest in the community,” Thomas said. “I’m not talking about government taxing and redistributing, I’m talking about genuine heartfelt care for other people. At the core, most people care about the human condition. Around the holidays particularly, people respond to opportunities to contribute monetarily and volunteer time.” Thomas, 38, was raised in a home where his family had everything they needed and most of what they wanted. “I was never exposed to neglect, abuse, hunger, etc., so there was a certain shock factor when I got into the real world and realized that such conditions do exist, particularly that they exist in my own community,” he said. Thomas is a 2000 University of Georgia graduate who began his career in Atlanta but really made his mark in the real estate industry in Athens, where in 2004 was named Athens’ Best Realtor by the Athens Banner-Herald. That year he was in the top 10 percent of Coldwell Banker agents worldwide and in the next two consecutive years was in the top 3 percent. “The college and early professional years of my life is Matt Thomas, co-owner of Atlas Real Estate Advisors and Rent Athens, poses for a photo in the Georgian downtown Athens. John Roark/Athens Magazine Athens Magazine is quarterly magazine published by the Athens Banner-Herald in Athens, Ga.

Athens Magazine is quarterly magazine published by the Athens Banner-Herald in Athens, Ga.