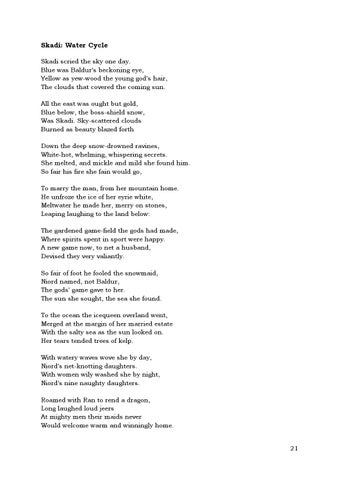 Skadi: Water Cycle Skadi scried the sky one day. Blue was Baldur's beckoning eye, Yellow as yew-wood the young god's hair, The clouds that covered the coming sun. All the east was ought but gold, Blue below, the boss-shield snow, Was Skadi. Sky-scattered clouds Burned as beauty blazed forth Down the deep snow-drowned ravines, White-hot, whelming, whispering secrets. She melted, and mickle and mild she found him. So fair his fire she fain would go, To marry the man, from her mountain home. He unfroze the ice of her eyrie white, Meltwater he made her, merry on stones, Leaping laughing to the land below: The gardened game-field the gods had made, Where spirits spent in sport were happy. A new game now, to net a husband, Devised they very valiantly. So fair of foot he fooled the snowmaid, Niord named, not Baldur, The gods' game gave to her. The sun she sought, the sea she found. To the ocean the icequeen overland went, Merged at the margin of her married estate With the salty sea as the sun looked on. Her tears tended trees of kelp. With watery waves wove she by day, Niord's net-knotting daughters. With women wily washed she by night, Niord's nine naughty daughters. Roamed with Ran to rend a dragon, Long laughed loud jeers At mighty men their maids never Would welcome warm and winningly home. 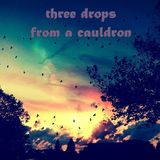 Three Drops from a Cauldron