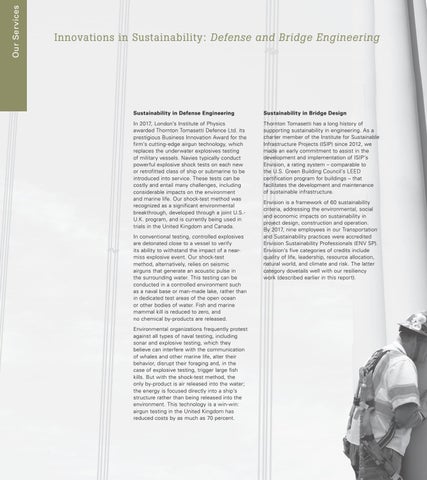 In 2017, London’s Institute of Physics awarded Thornton Tomasetti Defence Ltd. its prestigious Business Innovation Award for the firm’s cutting-edge airgun technology, which replaces the underwater explosives testing of military vessels. Navies typically conduct powerful explosive shock tests on each new or retrofitted class of ship or submarine to be introduced into service. These tests can be costly and entail many challenges, including considerable impacts on the environment and marine life. Our shock-test method was recognized as a significant environmental breakthrough, developed through a joint U.S.U.K. program, and is currently being used in trials in the United Kingdom and Canada.

Thornton Tomasetti has a long history of supporting sustainability in engineering. As a charter member of the Institute for Sustainable Infrastructure Projects (ISIP) since 2012, we made an early commitment to assist in the development and implementation of ISIP’s Envision, a rating system – comparable to the U.S. Green Building Council’s LEED certification program for buildings – that facilitates the development and maintenance of sustainable infrastructure.

In conventional testing, controlled explosives are detonated close to a vessel to verify its ability to withstand the impact of a nearmiss explosive event. Our shock-test method, alternatively, relies on seismic airguns that generate an acoustic pulse in the surrounding water. This testing can be conducted in a controlled environment such as a naval base or man-made lake, rather than in dedicated test areas of the open ocean or other bodies of water. Fish and marine mammal kill is reduced to zero, and no chemical by-products are released. Environmental organizations frequently protest against all types of naval testing, including sonar and explosive testing, which they believe can interfere with the communication of whales and other marine life, alter their behavior, disrupt their foraging and, in the case of explosive testing, trigger large fish kills. But with the shock-test method, the only by-product is air released into the water; the energy is focused directly into a ship’s structure rather than being released into the environment. This technology is a win-win: airgun testing in the United Kingdom has reduced costs by as much as 70 percent.

Envision is a framework of 60 sustainability criteria, addressing the environmental, social and economic impacts on sustainability in project design, construction and operation. By 2017, nine employees in our Transportation and Sustainability practices were accredited Envision Sustainability Professionals (ENV SP). Envision’s five categories of credits include quality of life, leadership, resource allocation, natural world, and climate and risk. The latter category dovetails well with our resiliency work (described earlier in this report). 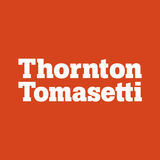