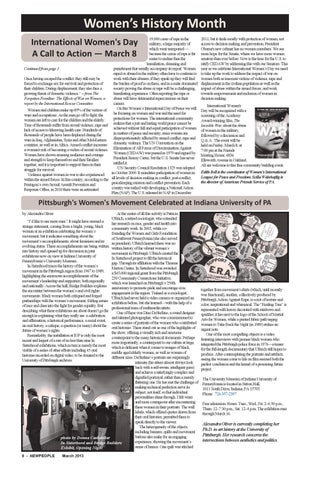 Women’s History Month 19,000 cases of rape in the military, a large majority of which went unreported — because the crime of rape is far easier to endure than the humiliation, shunning and Continued from page 1 punishment that usually accompany its report. Women raped or abused in the military often have to continue to Once having escaped the conflict, they still may be work with their abusers; if they speak up they will find forced to exchange sex for survival and protection of the burden of proof is on them, and in a male dominated their children. During displacement, they also face a society proving the abuse or rape will be a challenging, growing threat of domestic violence.” -- from The humiliating experience. Often reporting the rape or Forgotten Frontline: The Effects of War on Women, a abuse will have detrimental repercussions on their report by the International Rescue Committee. careers. On this Women’s International Day of Peace we will Women and children make up 85% of the victims of be focusing on women and war and the need for wars and occupations. As the men go off to fight, the protections for women. The international community women are left to care for the children and the elderly. Tens of thousands suffer from sexual violence, rape and realizes that a just and lasting world peace cannot be achieved without full and equal participation of women lack of access to lifesaving health care. Hundreds of in matters of peace and security, since women are thousands of people have been displaced during the disproportionately affected by armed conflict, rape and wars in Iraq, Afghanistan, Syria and other Mid-Eastern countries, as well as in Africa. Armed conflict increases domestic violence. The UN Convention on the a woman&#39;s risk of becoming a victim of sexual violence. Elimination of All Forms of Discrimination Against Women (CEDAW) was passed in 1979 and signed by Women have shown amazing resilience and courage President Jimmy Carter, but the U.S. Senate has never and strength to keep themselves and their families ratified it. together, and it is important to support them in their UN Security Council Resolution 1325 was adopted struggle for survival. in October 2000. It mandates participation of women in Violence against women in war is also experienced within the armed forces. In this country, according to the all levels of decision making in conflict, post-conflict, peacekeeping mission and conflict prevention. Each Pentagon’s own Sexual Assault Prevention and country was tasked with developing a National Action Response Office, in 2010 there were an estimated Plan (NAP). The U.S. released its NAP in December

2011, but it deals mostly with protection of women, not access to decision making and prevention. President Obama&#39;s new cabinet has no women members. We see more hope for the Senate, where we have more women senators than ever before. Now is the time for the U.S. to ratify CEDAW by addressing this with our Senators. This year as we celebrate International Women’s Day we need to take up the work to address the impact of war on women both as innocent victims of violence, rape and displacement in the civilian population as well as the impact of abuse within the armed forces, and work towards empowerment and inclusion of women in decision making. International Women&#39;s Day will be recognized with a screening of the Academy Award-winning film, The Invisible War, about the abuse of women in the military, followed by a discussion and Q &amp; A. The event will be held on Friday, March 8, at 7:00 pm at the Friends Meeting House, 4836 Ellsworth Avenue in Oakland. All are welcome to this free community building event. Edith Bell is the coordinator of Women’s International League for Peace and Freedom. Scilla Wahrhaftig is the director of American Friends Service of PA.

Pittsburgh&#39;s Women&#39;s Movement Celebrated at Indiana University of PA At the center of all this activity is Patricia Ulbrich, a retired sociologist, who extended “I’d like to see more men.” It might have seemed a her research on race, gender and health into strange statement, coming from a bright, young, black community work. In 2002, while cowoman at an exhibition celebrating the women’s founding the Women and Girls Foundation movement, but it indicates something about the of Southwest Pennsylvania (she also served movement’s accomplishments, about feminism and its as president). Ulbrich learned there was no evolving status. These accomplishments are being written written history of the vibrant women’s into history and opened up for discussion in joint movement in Pittsburgh. Ulbrich created the exhibitions now on view at Indiana University of In Sisterhood project to fill the historical Pennsylvania’s University Museum. gap. Through its affiliation with the Thomas In Sisterhood traces the history of the women’s Merton Center, In Sisterhood was awarded movement in the Pittsburgh region from 1967 to 1989, a $45,000 regional grant from the Pittsburgh highlighting the enormous accomplishments of the 250 Community Connections Initiative, movement’s leadership and supporters, both regionally which was launched on Pittsburgh’s 250th and nationally. Across the hall, Bridge Builders explores anniversary to promote pride and encourage civic the encounter between the women’s and civil rights engagement in the region. Trained as a sociologist, movements. Black women both critiqued and forged Ulbrich had never held a video camera or organized an partnerships with the women’s movement, folding issues exhibition before, but she learned—with the help of a of race and class into the fight for gender equality. But professional team of multimedia artists. describing what these exhibitions are about doesn’t go far One of these was Dino DeStefano, a sound designer enough in explaining what they really are: a celebration and talented photographer, who was commissioned to and affirmation, a historical performance, a social event, create a series of portraits of the women who contributed an oral history, a critique, a question (or many) about the oral histories. These stand out as one of the highlights of future of women’s rights. the show, offering a visually rich and sensuous Remarkably, the installation at IUP is only the most counterpoint to the many historical documents. Perhaps recent and largest of a run of no less than nine In more importantly, a counterpoint to our culture at large, Sisterhood exhibitions, which in turn is merely the most which is deficient when it comes to images of black, visible of a series of other efforts including 45 oral middle aged elderly women, as well as women of histories recorded on digital video, to be donated to the different sizes. DeStefano’s portraits are surprisingly University of Pittsburgh archives. intimate (his sitters almost always look back with a self-aware, intelligent gaze) and achieve a satisfyingly complex and dignified portrayal, rather than a merely flattering one. He has met the challenge of making technical perfection serve its subject, not itself, so that individual personalities shine through. I felt wiser and more courageous after encountering these women in their portraits. The wall labels, which offered quotes drawn from their oral histories, permitted them to speak directly to the viewer. The heterogeneity of the objects, including banners, quilts and movement buttons also make for an engaging photo by Donna Cashdollar experience, showing the movement’s In Sisterhood and Bridge Builders sense of humor. One quilt was stitched Exhibit, Opening Night

together from movement t-shirts (which, until recently was functional), another, collectively produced by Pittsburgh Action Against Rape, is a riot of texture and color, inspirational and whimsical. The “Healing Tree” is represented with leaves decorated with rainbows and sparkles; it lies next to the logo of the School of Martial Arts for Women, while a printed fabric path urging women to Take Back the Night (in 1989) strikes an urgent note. One of the most compelling objects is a video featuring interviews with pioneer black women who integrated the Pittsburgh police force in 1976—a teaser for the full-length documentary that Ulbrich still hopes to produce. After contemplating the portraits and artifacts, seeing the women come to life on film seemed both the perfect conclusion and the kernel of a promising future project. The University Museum of Indiana University of Pennsylvania is located in Sutton Hall, 1011 South Drive, Indiana, PA 15705. Phone: 724-357-2397 Free admission. Hours: Tues., Wed., Fri. 2–6:30 p.m., Thurs. 12–7:30 p.m., Sat. 12–4 p.m. The exhibition runs through March 16.

Alexandra Oliver is currently completing her Ph.D. in art history at the University of Pittsburgh. Her research concerns the intersections between aesthetics and politics.

The March issue of the New People, Pittsburgh's peace and social justice newspaper. 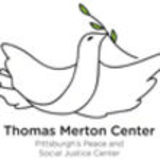