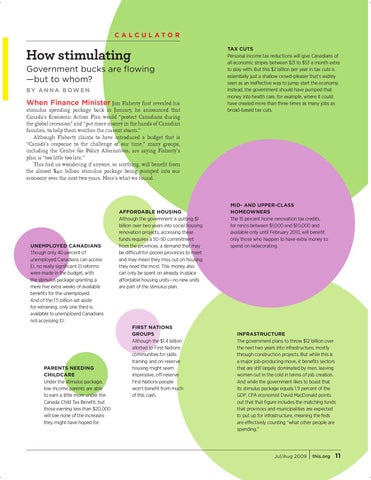 C&lt;3;&gt;:=G32 1/&lt;/27/&lt;A Though only 40 percent of unemployed Canadians can access EI, no really significant EI reforms were made in the budget, with the stimulus package granting a mere five extra weeks of available benefits for the unemployed. And of the 1.5 billion set aside for retraining, only one third is available to unemployed Canadians not accessing EI.

/44=@2/0:3 6=CA7&lt;5 Although the government is putting $1 billion over two years into social housing renovation projects, accessing these funds requires a 50-50 commitment from the provinces, a demand that may be difficult for poorer provinces to meet and may mean they miss out on housing they need the most. This money also can only be spent on already in-place affordable housing unitsâ&amp;#x20AC;&amp;#x201D;no new units are part of the stimulus plan.

47@AB &lt;/B7=&lt;A 5@=C&gt;A Although the $1.4 billion allotted to First Nations communities for skills training and on-reserve housing might seem impressive, off-reserve First Nations people wonâ&amp;#x20AC;&amp;#x2122;t benefit from much of this cash.

B/F 1CBA Personal income tax reductions will give Canadians of all economic stripes between $21 to $53 a month extra to play with. But this $2 billion per year in tax cuts is essentially just a shallow crowd-pleaser thatâ&amp;#x20AC;&amp;#x2122;s widely seen as an ineffective way to jump-start the economy. Instead, the government should have pumped that money into health care, for example, where it could have created more than three times as many jobs as broad-based tax cuts.

7&lt;4@/AB@C1BC@3 The government plans to throw $12 billion over the next two years into infrastructure, mostly through construction projects. But while this is a major job-producing move, it benefits sectors that are still largely dominated by men, leaving women out in the cold in terms of job creation. And while the government likes to boast that its stimulus package equals 1.9 percent of the GDP, CPA economist David MacDonald points out that that figure includes the matching funds that provinces and municipalities are expected to put up for infrastructure, meaning the feds are effectively counting â&amp;#x20AC;&amp;#x153;what other people are spending.â&amp;#x20AC;?

When Finance Minister Jim Flaherty first revealed his stimulus spending package back in January, he announced that Canada's Economic Action Plan would "protect Canadians during the global recession" and "put more money in the hands of Canadian families, to help them weather the current storm."Although Flaherty claims to have introduced a budget that is "Canada's response to the challenge of our time," many groups, including the Centre for Policy Alternatives, are saying Flaherty's plan is "too little too late."This had us wondering if anyone, or anything, will benefit from the almost $40 billion stimulus package being pumped into our economy over the next two years. Here's what we found. 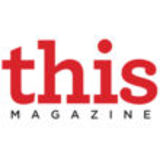