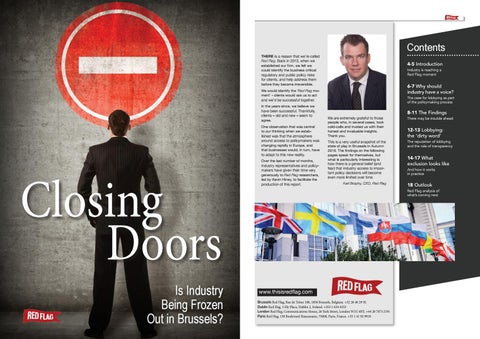 THERE is a reason that we’re called Red Flag. Back in 2013, when we established our firm, we felt we could identify the business critical regulatory and public policy risks for clients, and help address them before they became irreversible.

6-7 Why should industry have a voice?

We would identify the ‘Red Flag moment’ - clients would ask us to act and we’d be successful together. In the years since, we believe we have been successful. Thankfully, clients – old and new – seem to agree. One observation that was central to our thinking when we established was that the atmosphere around access to policymakers was changing rapidly in Europe, and that businesses would, in turn, have to adapt to this new reality.

Closing Doors Is Industry Being Frozen Out in Brussels?

Over the last number of months, industry representatives and policymakers have given their time very generously to Red Flag researchers, led by Kevin Hiney, to facilitate the production of this report.

The case for lobbying as part of the policymaking process

We are extremely grateful to those people who, in several cases, took cold-calls and trusted us with their honest and invaluable insights. Thank you. This is a very useful snapshot of the state of play in Brussels in Autumn 2016. The findings on the following pages speak for themselves, but what is particularly interesting is how there is a general belief (and fear) that industry access to important policy decisions will become even more limited over time. Karl Brophy, CEO, Red Flag

There may be trouble ahead

12-13 Lobbying: the ‘dirty word’ The reputation of lobbying and the role of transparency Closing Doors - Is industry being frozen out in Brussels?

Research carried out by Strategic Communications and Campaign firm Red Flag over three months and across dozens of company and sectoral repr...

Closing Doors - Is industry being frozen out in Brussels?

Research carried out by Strategic Communications and Campaign firm Red Flag over three months and across dozens of company and sectoral repr...