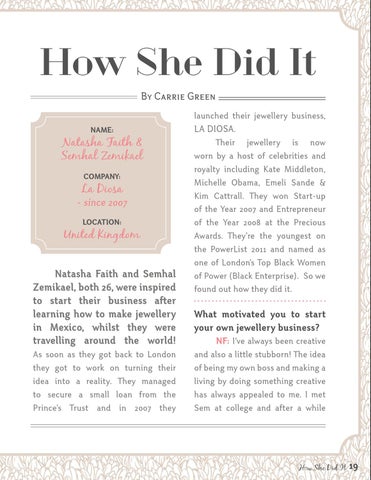 How She Did It By Carrie Green Name:

launched their jewellery business, LA DIOSA. Their jewellery is now worn by a host of celebrities and royalty including Kate Middleton, Michelle Obama, Emeli Sande & Kim Cattrall. They won Start-up of the Year 2007 and Entrepreneur of the Year 2008 at the Precious Awards. They’re the youngest on the PowerList 2011 and named as one of London’s Top Black Women of Power (Black Enterprise). So we found out how they did it.

Natasha Faith and Semhal Zemikael, both 26, were inspired to start their business after learning how to make jewellery in Mexico, whilst they were travelling around the world!

As soon as they got back to London they got to work on turning their idea into a reality. They managed to secure a small loan from the Prince’s Trust and in 2007 they

and also a little stubborn! The idea of being my own boss and making a living by doing something creative has always appealed to me. I met Sem at college and after a while

What motivated you to start your own jewellery business?

How She Did It 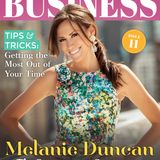 Interview with Kanya King, founder of the MOBO Awards - find out how she did it! Learn how to pay attention to your intuition and discover t...

Interview with Kanya King, founder of the MOBO Awards - find out how she did it! Learn how to pay attention to your intuition and discover t...