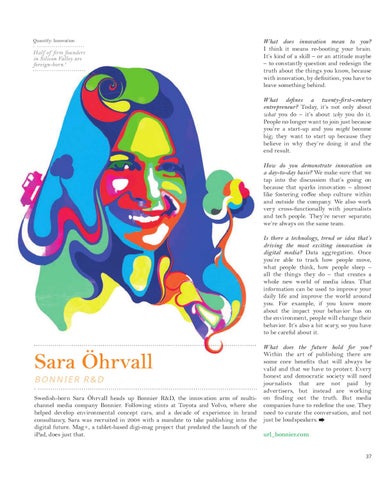 Half of ﬁrm founders in Silicon Valley are foreign-born.3

What does innovation mean to you? I think it means re-booting your brain. It’s kind of a skill – or an attitude maybe – to constantly question and redesign the truth about the things you know, because with innovation, by definition, you have to leave something behind. What deﬁnes a twenty-ﬁrst-century entrepreneur? Today, it’s not only about what you do – it’s about why you do it. People no longer want to join just because you’re a start-up and you might become big; they want to start up because they believe in why they’re doing it and the end result. How do you demonstrate innovation on a day-to-day basis? We make sure that we tap into the discussion that’s going on because that sparks innovation – almost like fostering coﬀee shop culture within and outside the company. We also work very cross-functionally with journalists and tech people. They’re never separate; we’re always on the same team. Is there a technology, trend or idea that’s driving the most exciting innovation in digital media? Data aggregation. Once you’re able to track how people move, what people think, how people sleep – all the things they do – that creates a whole new world of media ideas. That information can be used to improve your daily life and improve the world around you. For example, if you know more about the impact your behavior has on the environment, people will change their behavior. It’s also a bit scary, so you have to be careful about it.

Swedish-born Sara Öhrvall heads up Bonnier R&D, the innovation arm of multichannel media company Bonnier. Following stints at Toyota and Volvo, where she helped develop environmental concept cars, and a decade of experience in brand consultancy, Sara was recruited in 2008 with a mandate to take publishing into the digital future. Mag+, a tablet-based digi-mag project that predated the launch of the iPad, does just that.

What does the future hold for you? Within the art of publishing there are some core benefits that will always be valid and that we have to protect. Every honest and democratic society will need journalists that are not paid by advertisers, but instead are working on finding out the truth. But media companies have to redefine the use. They need to curate the conversation, and not just be loudspeakers. 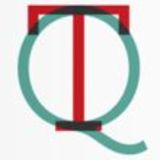 In 2003, a total of five exabytes of data existed. Now we generate that every two days. We are, literally, more creative than ever. Where t...

In 2003, a total of five exabytes of data existed. Now we generate that every two days. We are, literally, more creative than ever. Where t...