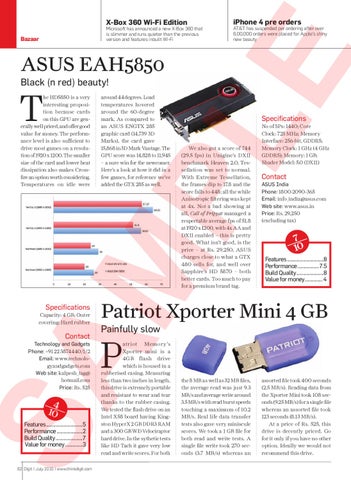 AT&T has suspended per ordering after over 6,00,000 orders were placed for Apple’s shiny new beauty

he HD5850 is a very interesting proposition because cards on this GPU are generally well priced, and offer good value for money. The performance level is also sufﬁcient to drive most games on a resolution of 1920 x 1200. The smaller size of the card and lower heat dissipation also makes Crossﬁre an option worth considering. Temperatures on idle were

atriot Memory’s Xporter mini is a 4GB flash drive which is housed in a rubberised casing. Measuring less than two inches in length, this drive is extremely portable and resistant to wear and tear thanks to the rubber casing. We tested the ﬂash drive on an Intel X58 board having Kingston HyperX 2 GB DDR3 RAM and a 300 GB WD Velociraptor hard drive. In the sythetic tests like HD Tach it gave very low read and write scores. For both

the 8 MB as well as 32 MB ﬁles, the average read was just 9.3 MB/s and average write around 3.5 MB/s with read burst speeds touching a maximum of 10.2 MB/s. Real life data transfer tests also gave very miniscule scores. We took a 1 GB ﬁle for both read and write tests. A single ﬁle write took 270 seconds (3.7 MB/s) whereas an 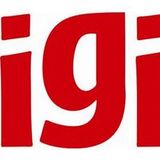