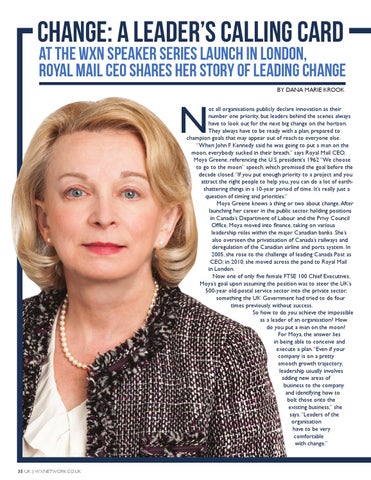 ot all organisations publicly declare innovation as their number one priority, but leaders behind the scenes always have to look out for the next big change on the horizon. They always have to be ready with a plan, prepared to champion goals that may appear out of reach to everyone else. “When John F. Kennedy said he was going to put a man on the moon, everybody sucked in their breath,” says Royal Mail CEO, Moya Greene, referencing the U.S. president’s 1962 “We choose to go to the moon” speech, which promised the goal before the decade closed. “If you put enough priority to a project and you attract the right people to help you, you can do a lot of earthshattering things in a 10-year period of time. It’s really just a question of timing and priorities.” Moya Greene knows a thing or two about change. After launching her career in the public sector, holding positions in Canada’s Department of Labour and the Privy Council Office, Moya moved into finance, taking on various leadership roles within the major Canadian banks. She’s also overseen the privatisation of Canada’s railways and deregulation of the Canadian airline and ports system. In 2005, she rose to the challenge of leading Canada Post as CEO; in 2010, she moved across the pond to Royal Mail in London. Now one of only five female FTSE 100 Chief Executives, Moya’s goal upon assuming the position was to steer the UK’s 500-year old-postal service sector into the private sector, something the UK Government had tried to do four times previously, without success. So how to do you achieve the impossible as a leader of an organisation? How do you put a man on the moon? For Moya, the answer lies in being able to conceive and execute a plan. “Even if your company is on a pretty smooth growth trajectory, leadership usually involves adding new areas of business to the company and identifying how to bolt those onto the existing business,” she says. “Leaders of the organisation have to be very comfortable with change.” 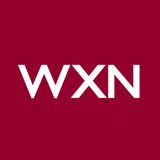