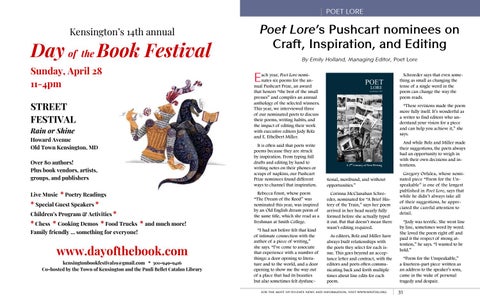 Day​ ​of the ​Book Festival

kensingtonbookfestival19@gmail.com * 301-949-9416 Co-hosted by the Town of Kensington and the Pauli Bellet Catalan Library

It is often said that poets write poems because they are struck by inspiration. From typing full drafts and editing by hand $10.00 to writing notes on their phones or scraps of napkins, our Pushcart Prize nominees found different ways to channel that inspiration. Rebecca Foust, whose poem “The Dream of the Rood” was nominated this year, was inspired by an Old English dream poem of the same title, which she read as a freshman at Smith College. “I had not before felt that kind of intimate connection with the author of a piece of writing,” she says. “I’ve come to associate that experience with a number of things: a door opening to literature and to the world, and a door opening to show me the way out of a place that had its beauties but also sometimes felt dysfunc-

Schroeder says that even something as small as changing the tense of a single word in the poem can change the way the poem reads. “These revisions made the poem more fully itself. It’s wonderful as a writer to find editors who understand your vision for a piece and can help you achieve it,” she says.

ach year, Poet Lore nominates six poems for the annual Pushcart Prize, an award that honors “the best of the small presses” and compiles an annual anthology of the selected winners. This year, we interviewed three of our nominated poets to discuss their poems, writing habits, and the impact of editing their work with executive editors Jody Bolz and E. Ethelbert Miller.

A 2nd Century of New Writing

tional, moribund, and without opportunities.” Corinna McClanahan Schroeder, nominated for “A Brief History of the Train,” says her poem arrived in her head nearly fully formed before she actually typed it out. But that doesn’t mean there wasn’t editing required. As editors, Bolz and Miller have always built relationships with the poets they select for each issue. This goes beyond an acceptance letter and contract, with the editors and poets often communicating back and forth multiple times about line edits for each poem.

for the most up-to-date news and information, visit www.writer.org

And while Bolz and Miller made their suggestions, the poets always had an opportunity to weigh in with their own decisions and intentions. Gregory Orfalea, whose nominated piece “Poem for the Unspeakable” is one of the longest published in Poet Lore, says that while he didn’t always take all of their suggestions, he appreciated the careful attention to detail. “Jody was terrific. She went line by line, sometimes word by word. She loved the poem right off and paid it the respect of strong attention,” he says. “I wanted to be bold.” “Poem for the Unspeakable,” a fourteen-part piece written as an address to the speaker’s sons, came in the wake of personal tragedy and despair. More from The Writer's Center