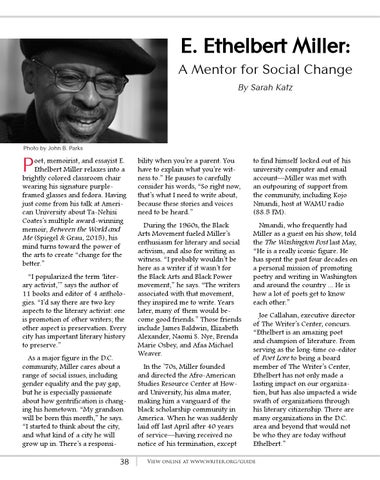 Photo by John B. Parks

oet, memoirist, and essayist E. Ethelbert Miller relaxes into a brightly colored classroom chair wearing his signature purpleframed glasses and fedora. Having just come from his talk at American University about Ta-Nehisi Coates’s multiple award-winning memoir, Between the World and Me (Spiegel & Grau, 2015), his mind turns toward the power of the arts to create “change for the better.” “I popularized the term ‘literary activist,’” says the author of 11 books and editor of 4 anthologies. “I’d say there are two key aspects to the literary activist: one is promotion of other writers; the other aspect is preservation. Every city has important literary history to preserve.” As a major figure in the D.C. community, Miller cares about a range of social issues, including gender equality and the pay gap, but he is especially passionate about how gentrification is changing his hometown. “My grandson will be born this month,” he says. “I started to think about the city, and what kind of a city he will grow up in. There’s a responsi-

bility when you’re a parent. You have to explain what you’re witness to.” He pauses to carefully consider his words, “So right now, that’s what I need to write about, because these stories and voices need to be heard.”

to find himself locked out of his university computer and email account—Miller was met with an outpouring of support from the community, including Kojo Nmandi, host at WAMU radio (88.5 FM).

During the 1960s, the Black Arts Movement fueled Miller’s enthusiasm for literary and social activism, and also for writing as witness. “I probably wouldn’t be here as a writer if it wasn’t for the Black Arts and Black Power movement,” he says. “The writers associated with that movement, they inspired me to write. Years later, many of them would become good friends.” Those friends include James Baldwin, Elizabeth Alexander, Naomi S. Nye, Brenda Marie Osbey, and Afaa Michael Weaver.

Nmandi, who frequently had Miller as a guest on his show, told the The Washington Post last May, “He is a really iconic figure. He has spent the past four decades on a personal mission of promoting poetry and writing in Washington and around the country ... He is how a lot of poets get to know each other.”

In the ’70s, Miller founded and directed the Afro-American Studies Resource Center at Howard University, his alma mater, making him a vanguard of the black scholarship community in America. When he was suddenly laid off last April after 40 years of service—having received no notice of his termination, except

Joe Callahan, executive director of The Writer’s Center, concurs. “Ethelbert is an amazing poet and champion of literature. From serving as the long-time co-editor of Poet Lore to being a board member of The Writer’s Center, Ethelbert has not only made a lasting impact on our organization, but has also impacted a wide swath of organizations through his literary citizenship. There are many organizations in the D.C. area and beyond that would not be who they are today without Ethelbert.” The Writer's Center is pleased to present the summer 2016 issue of the Workshop & Event Guide. Inside you'll find an in-depth profile of our...

The Writer's Center is pleased to present the summer 2016 issue of the Workshop & Event Guide. Inside you'll find an in-depth profile of our...