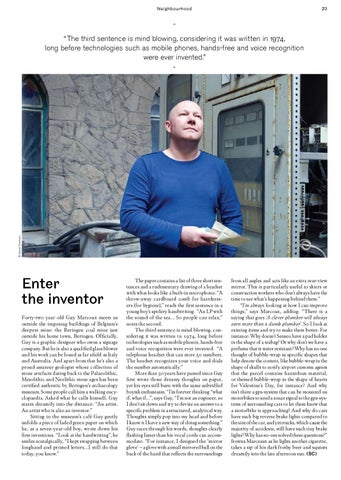 ˆ “ The third sentence is mind blowing, considering it was written in 1974, long before technologies such as mobile phones, hands-free and voice recognition were ever invented.”

Enter the inventor Forty-two year old Guy Marcoux meets us outside the imposing buildings of Belgium’s deepest mine: the Beringen coal mine just outside his home town, Beringen. Officially, Guy is a graphic designer who owns a signage company. But he is also a qualified glass blower and his work can be found as far afield as Italy and Australia. And apart from that he’s also a proud amateur geologist whose collection of stone artefacts dating back to the Palaeolithic, Mesolithic and Neolithic stone ages has been certified authentic by Beringen’s archaeology museum. Some people call him a walking encyclopaedia. Asked what he calls himself, Guy stares dreamily into the distance: “An artist. An artist who is also an inventor.” Sitting in the museum’s café Guy gently unfolds a piece of faded green paper on which he, as a seven-year-old boy, wrote down his first inventions. “Look at the handwriting”, he smiles nostalgically, “I kept swapping between longhand and printed letters…I still do that today, you know.”

The paper contains a list of three short sentences and a rudimentary drawing of a headset with what looks like a built-in microphone: “A throw-away cardboard comb for hairdressers (for hygiene),” reads the first sentence in a young boy’s spidery handwriting. “An LP with the sound of the sea… So people can relax,” notes the second. The third sentence is mind blowing, considering it was written in 1974, long before technologies such as mobile phones, hands-free and voice recognition were ever invented. “A telephone headset that can store 50 numbers. The headset recognizes your voice and dials the number automatically.” More than 30 years have passed since Guy first wrote those dreamy thoughts on paper, yet his eyes still burn with the same unbridled boyish enthusiasm. “I’m forever thinking “what if, what if…”, says Guy, “I’m not an engineer, so I don’t sit down and try to devise an answer to a specific problem in a structured, analytical way. Thoughts simply pop into my head and before I know it I have a new way of doing something.” Guy races through his words, thoughts clearly flashing faster than his vocal cords can accommodate: “For instance, I designed the ‘mirror glove’ – a glove with a small mirrored ball on the back of the hand that reflects the surroundings

from all angles and acts like an extra rear-view mirror. This is particularly useful to skiers or construction workers who don’t always have the time to see what’s happening behind them.” “I’m always looking at how I can improve things,” says Marcoux, adding: “There is a saying that goes ‘A clever plumber will always earn more than a dumb plumber’. So I look at existing items and try to make them better. For instance: Why doesn’t Senseo have a pad holder in the shape of a teabag? Or why don’t we have a perfume that is water resistant? Why has no one thought of bubble-wrap in specific shapes that help denote the content, like bubble-wrap in the shape of skulls to notify airport customs agents that the parcel contains hazardous material, or themed bubble-wrap in the shape of hearts for Valentine’s Day, for instance? And why isn’t there a gps-system that can be mounted on motorbikes to send a sonar signal to the gps-systems of surrounding cars to let them know that a motorbike is approaching? And why do cars have such big reverse brake lights compared to the size of the car, and yet trucks, which cause the majority of accidents, still have such tiny brake lights! Why has no-one solved these questions?” frowns Marceaux as he lights another cigarette, takes a sip of his dark frothy beer and squints dreamily into the late afternoon sun. (SC) 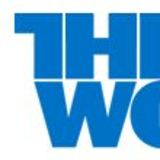