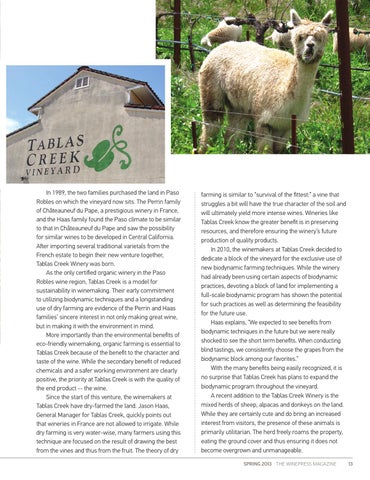 In 1989, the two families purchased the land in Paso Robles on which the vineyard now sits. The Perrin family of Châteauneuf du Pape, a prestigious winery in France, and the Haas family found the Paso climate to be similar to that in Châteauneuf du Pape and saw the possibility for similar wines to be developed in Central California. After importing several traditional varietals from the French estate to begin their new venture together, Tablas Creek Winery was born. As the only certified organic winery in the Paso Robles wine region, Tablas Creek is a model for sustainability in winemaking. Their early commitment to utilizing biodynamic techniques and a longstanding use of dry farming are evidence of the Perrin and Haas families’ sincere interest in not only making great wine, but in making it with the environment in mind. More importantly than the environmental benefits of eco-friendly winemaking, organic farming is essential to Tablas Creek because of the benefit to the character and taste of the wine. While the secondary benefit of reduced chemicals and a safer working environment are clearly positive, the priority at Tablas Creek is with the quality of the end product -- the wine. Since the start of this venture, the winemakers at Tablas Creek have dry-farmed the land. Jason Haas, General Manager for Tablas Creek, quickly points out that wineries in France are not allowed to irrigate. While dry farming is very water-wise, many farmers using this technique are focused on the result of drawing the best from the vines and thus from the fruit. The theory of dry

farming is similar to “survival of the fittest:” a vine that struggles a bit will have the true character of the soil and will ultimately yield more intense wines. Wineries like Tablas Creek know the greater benefit is in preserving resources, and therefore ensuring the winery’s future production of quality products. In 2010, the winemakers at Tablas Creek decided to dedicate a block of the vineyard for the exclusive use of new biodynamic farming techniques. While the winery had already been using certain aspects of biodynamic practices, devoting a block of land for implementing a full-scale biodynamic program has shown the potential for such practices as well as determining the feasibility for the future use. Haas explains, “We expected to see benefits from biodynamic techniques in the future but we were really shocked to see the short term benefits. When conducting blind tastings, we consistently choose the grapes from the biodynamic block among our favorites.” With the many benefits being easily recognized, it is no surprise that Tablas Creek has plans to expand the biodynamic program throughout the vineyard. A recent addition to the Tablas Creek Winery is the mixed herds of sheep, alpacas and donkeys on the land. While they are certainly cute and do bring an increased interest from visitors, the presence of these animals is primarily utilitarian. The herd freely roams the property, eating the ground cover and thus ensuring it does not become overgrown and unmanageable. SPRING 2013 THE WINEPRESS MAGAZINE 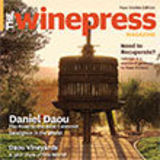