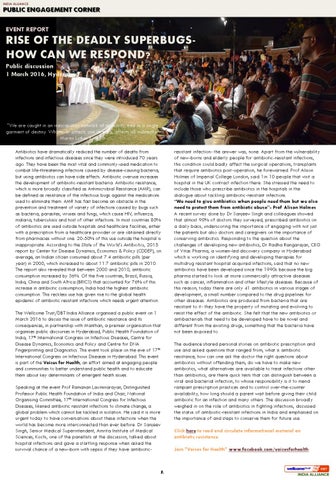 RISE OF THE DEADLY SUPERBUGSHOW CAN WE RESPOND? Public discussion 1 March 2016, Hyderabad

“We are caught in an inescapable network of mutuality, tied in a single garment of destiny. Whatever affects one directly, affects all indirectly.” Martin Luther King, Jr Antibiotics have dramatically reduced the number of deaths from infections and infectious diseases since they were introduced 70 years ago. They have been the most vital and commonly-used medication to combat life-threatening infections caused by disease-causing bacteria, but using antibiotics can have side effects. Antibiotic overuse increases the development of antibiotic-resistant bacteria. Antibiotic resistance, which is more broadly classified as Antimicrobial Resistance (AMR), can be defined as resistance of the infectious bugs against the medications used to eliminate them. AMR has fast become an obstacle in the prevention and treatment of variety of infections caused by bugs such as bacteria, parasites, viruses and fungi, which cause HIV, influenza, malaria, tuberculosis and host of other infections. In most countries 80% of antibiotics are used outside hospitals and healthcare facilities, either with a prescription from a healthcare provider or are obtained directly from pharmacies without one. 20-50% of this use outside the hospital is inappropriate. According to the State of the World&#39;s Antibiotics, 2015 report by Center for Disease Dynamics, Economics &amp; Policy (CDDEP), on average, an Indian citizen consumed about 7.4 antibiotic pills (per year) in 2000, which increased to about 11.7 antibiotic pills in 2010. The report also revealed that between 2000 and 2010, antibiotic consumption increased by 36%. Of the five countries, Brazil, Russia, India, China and South Africa (BRICS) that accounted for 76% of this increase in antibiotic consumption, India had the highest antibiotic consumption. This reckless use has given rise to the global health epidemic of antibiotic resistant infections which needs urgent attention. The Wellcome Trust/DBT India Alliance organised a public event on 1 March 2016 to discuss the issue of antibiotic resistance and its consequences, in partnership with Manthan, a premier organisation that organises public discourses in Hyderabad, Public Health Foundation of India, 17th International Congress on Infectious Diseases, Centre for Disease Dynamics, Economics and Policy and Centre for DNA Fingerprinting and Diagnostics. This event took place on the eve of 17th International Congress on Infectious Diseases in Hyderabad. This event is part of the Voices for Health, an effort aimed at engaging people and communities to better understand public health and to educate them about key determinants of emergent heath issues. Speaking at the event Prof Ramanan Laxminarayan, Distinguished Professor Public Health Foundation of India and Chair, National Organising Committee, 17th International Congress for Infectious Diseases, likened antibiotic resistant infections to climate change, a global problem which cannot be tackled in isolation. He said it is more urgent today to have conversations about these infections when the world has become more interconnected than ever before. Dr Sanjeev Singh, Senior Medical Superintendent, Amrita Institute of Medical Sciences, Kochi, one of the panellists at the discussion, talked about hospital infections and gave a startling response when asked the survival chance of a new-born with sepsis if they have antibiotic-

resistant infection- the answer was, none. Apart from the vulnerability of new-borns and elderly people for antibiotic-resistant infections, this condition could badly affect the surgical operations, transplants that require antibiotics post-operation, he forewarned. Prof Alison Holmes of Imperial College London, said 1in 10 people that visit a hospital in the UK contract infection there. She stressed the need to include those who prescribe antibiotics in the hospitals in the dialogue about tackling antibiotic-resistant infections. “We need to give antibiotics when people need them but we also need to protect them from antibiotic abuse”- Prof Alison Holmes A recent survey done by Dr Sanjeev Singh and colleagues showed that almost 90% of doctors they surveyed, prescribed antibiotics on a daily basis, underscoring the importance of engaging with not just the patients but also doctors and caregivers on the importance of conserving antibiotics. Responding to the question about the challenges of developing new antibiotics, Dr Radha Rangarajan, CEO of Vitas Pharma, a women-led discovery company in Hyderabad which is working on identifying and developing therapies for multidrug resistant hospital acquired infections, said that no new antibiotics have been developed since the 1990s because the big pharma started to look at more commercially attractive diseases such as cancer, inflammation and other lifestyle diseases. Because of this reason, today there are only 41 antibiotics in various stages of development, a small number compared to the drug pipelines for other diseases. Antibiotics are produced from bacteria that are resistant to it- they have the property of mutating and evolving to resist the effect of the antibiotic. She felt that the new antibiotics or antibacterials that need to be developed have to be novel and different from the existing drugs, something that the bacteria have not been exposed to. The audience shared personal stories on antibiotic prescription and use and asked questions that ranged from, what is antibiotic resistance, how can one ask the doctor the right questions about antibiotics without offending them, do we have to make new antibiotics, what alternatives are available to treat infections other than antibiotics, are there quick tests that can distinguish between a viral and bacterial infection, to whose responsibility is it to mend rampant prescription practices and to control over-the-counter availability, how long should a parent wait before giving their child antibiotic for an infection and many others. The discussion broadly weighed in on the role of antibiotics in fighting infections, discussed the status of antibiotic-resistant infections in India and emphaised on the importance of and steps to conserve them for future use. Click here to read and circulate informational material on antibiotic resistance Join &quot;Voices for Health&quot; www.facebook.com/voicesforhealth 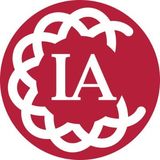