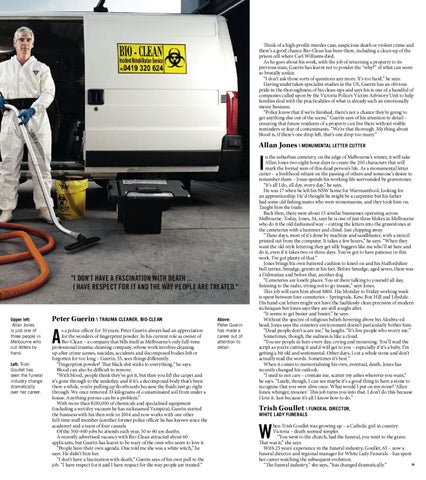 Think of a high-profile murder case, suspicious death or violent crime and there’s a good chance Bio-Clean has been there, including a clean-up of the prison cell where Carl Williams died. As he goes about his work, with the job of returning a property to its previous state, Guerin has learnt not to ponder the “why?” of what can seem so brutally unfair. “I don’t ask those sorts of questions any more. It’s too hard,” he says. Having undertaken specialist studies in the US, Guerin has an obvious pride in the thoroughness of his clean-ups and says his is one of a handful of companies called upon by the Victoria Police's Victim Advisory Unit to help families deal with the practicalities of what is already such an emotionally messy business. “Police know that if we’re finished, there’s not a chance they’re going to get anything else out of the scene,” Guerin says of his attention to detail – ensuring that future residents of a property can live there without visible reminders or fear of contaminants. “We’re that thorough. My thing about blood is, if there’s one drop left, that’s one drop too many.”

"I don't HAve A fAscInAtIon WItH deAtH ... I HAve respect for It And tHe WAy people Are treAted."

upper left: Allan Jones is just one of three people in Melbourne who cut letters by hand. left: Trish Goullet has seen the funeral industry change dramatically over her career.

s a police officer for 30 years, Peter Guerin always had an appreciation for the wonders of fingerprint powder. In his current role as owner of Bio-Clean – a company that bills itself as Melbourne’s only full-time professional trauma-cleaning company, whose work involves cleaning up after crime scenes, suicides, accidents and decomposed bodies left or forgotten for too long – Guerin, 53, sees things differently. “Fingerprint powder? That black shit sticks to everything,” he says. Blood can also be difficult to remove. “With blood, people think they’ve got it, but then you lift the carpet and it’s gone through to the underlay, and if it’s a decomposed body that’s been there a while, you’re pulling up floorboards because the fluids just go right through. We once removed 33 kilograms of contaminated soil from under a house. Anything porous can be a problem.” With more than $100,000 of chemicals and specialised equipment (including a wet/dry vacuum he has nicknamed Vampira), Guerin started the business with his then wife in 2004 and now works with one other full-time staff member (another former police officer he has known since the academy) and a team of four casuals. Of the 500-600 jobs he attends each year, 50 to 60 are deaths. A recently advertised vacancy with Bio-Clean attracted about 60 applicants, but Guerin has learnt to be wary of the ones who seem to love it. “People have their own agenda. One told me she was a white witch,” he says. He didn’t hire her. “I don’t have a fascination with death,” Guerin says of his own pull to the job. “I have respect for it and I have respect for the way people are treated.”

above: Peter Guerin has made a career out of attention to detail.

n the suburban cemetery, on the edge of Melbourne’s winter, it will take Allan Jones two eight-hour days to create the 200 characters that will mark the formal sum of this dead person’s life. As a monumental letter cutter – a livelihood reliant on the passing of others and someone’s desire to remember them – Jones spends his working life surrounded by gravestones. “It’s all I do, all day, every day,” he says. He was 17 when he left his NSW home for Warrnambool, looking for an apprenticeship. He’d thought he might be a carpenter but his father had some old fishing mates who were stonemasons, and they took him on. Taught him the trade. Back then, there were about 15 similar businesses operating across Melbourne. Today, Jones, 54, says he is one of just three blokes in Melbourne who do it the old-fashioned way – cutting the letters into the gravestones at the cemeteries with a hammer and chisel. Just chipping away. “These days, most of it’s done by machine and sandblaster, with a stencil printed out from the computer. It takes a few hours,” he says. “When they want the old-style lettering they get silly buggers like me who’ll sit here and do it, even if it takes two or three days. You’ve got to have patience in this work. I’ve got plenty of that.” Jones brings his own battered cushion to kneel on and his Staffordshire bull terrier, Smudge, grunts at his feet. Before Smudge, aged seven, there was a Dalmatian and before that, another dog. “Cemeteries are lonely places. You sit there talking to yourself all day, listening to the radio, trying not to go insane,” says Jones. This job will earn him about $800. His Monday to Friday working week is spent between four cemeteries – Springvale, Kew, Box Hill and Lilydale. His hand-cut letters might not have the faultlessly clean precision of modern techniques but Jones says they are still sought after. “It seems to get busier and busier,” he says. Without the spectre of religious beliefs hovering above his Akubra-ed head, Jones says the cemetery environment doesn’t particularly bother him. “Dead people don’t scare me,” he laughs. “It’s live people who worry me.” Sometimes, though, the sadness is like a cloud. “You see people in here every day, crying and mourning. You’ll read the script as you’re cutting it and it will get to you – especially if it’s a baby. I’m getting a bit old and sentimental. Other days, I cut a whole stone and don’t actually read the words. Sometimes it’s best.” When it comes to memorialising his own, eventual, death, Jones has recently changed his outlook. “I used to not care – cremate me, scatter my ashes wherever you want,” he says. “Lately, though, I can see maybe it’s a good thing to have a stone to recognise that you were alive once. What would I put on my stone? ‘Allan Jones: whinger, moaner.’ This job turns you into that. I don’t do this because I love it. Just because it’s all I know how to do.”

hen Trish Goullet was growing up – a Catholic girl in country Victoria – death seemed simpler. “You went to the church, had the funeral, you went to the grave. That was it,” she says. With 25 years' experience in the funeral industry, Goullet, 63 – now a funeral director and regional manager for White Lady Funerals – has spent her career watching the subsequent evolution. » “The funeral industry,” she says, “has changed dramatically.” 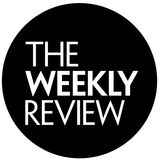 The Weekly Review ­ where and how to live in Melbourne Australia

The Weekly Review ­ where and how to live in Melbourne Australia