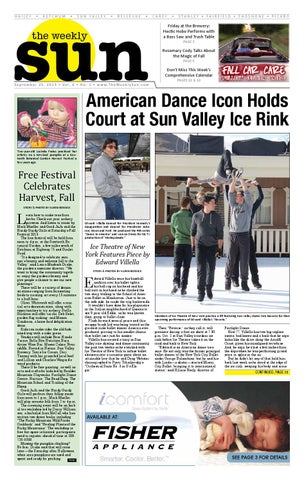 Friday at the Brewery: Hectic Hobo Performs with a Bass Saw and Trash Table Page 3

Rosemary Cody Talks About the Magic of Fall Page 5

Two-year-old Lucinda Frates practiced her artistry on a tot-sized pumpkin at a Sawtooth Botanical Garden Harvest Festival a few years ago.

earn how to make teas from herbs. Check out your archery prowess. And listen to music by Mark Mueller and Good JuJu and the Hurdy Gurdy Girls at Saturday’s Fall Festival 2013. The free festival will be held from noon to 4 p.m. at the Sawtooth Botanical Garden, a few miles south of Ketchum at Highway 75 and Gimlet Road. “It’s designed to celebrate summer’s bounty and welcome fall to the Valley,” said Laura Musbach Drake, the garden’s associate director. “We want to bring the community together, enjoy the garden’s beauty and give people a chance to see our new plantings.” There will be a variety of demonstrations ranging from fermenting foods to creating art every 15 minutes to a half-hour. Oliver Whitcomb will offer a martial arts demonstration, along with opportunities to try archery. Stella Stockton will offer tai chi; Deb Gelet, garden flag making; and Manon Gaudreau, a home food dehydration demo. Kids can make cider the old-fashioned way with a cider press. Vendors will include Bear Hands Farms, Bella Bite Nutrition Bars, divine Wine Bar, Mason Cakes, NourishMe, Rooted in Nature, Sun Valley Brewery, Toni’s Ice Cream, Dori Tunney with her grass-fed local beef and Lillian and Charlies Wiegard’s wood products. There’ll be face painting, as well as arts and crafts for kids led by Boulder Mountain Clayworks, Footlight Dance Centre, Nurture, The Bead Shop, The Mountain School and Trailing of the Sheep. Good JuJu and the Hurdy Gurdy Girls will perform their folksy music from noon to 1 p.m.; Mark Mueller will play acoustic folk from 2 to 4 p.m. The crowning event will be an herbal tea workshop led by Darcy Williamson, a herbalist from McCall who has written two dozen books, including “The Rocky Mountain Wild Foods Cookbook” and “Healing Plants of the Rocky Mountains.” The workshop is free but space is limited; participants need to register ahead of time at 208726-9358. Missing the pumpkin chucking? No fear. Drake said that will come later—the Saturday after Halloween when area pumpkins are used and spent and ready for pitching. tws

dward Villella wore his baseball uniform over his ballet tights, his ball cap on his head and his ball mitt in his hand as he climbed the two-story walkup to the School of American Ballet in Manhattan. Just to be on the safe side, he made the trip backwards. It wouldn’t have done for his playmates in the Italian neighborhood of Queens to see 8-year-old Eddie, as he was known then, going to ballet class. Flash forward several years and this scrappy brash kid was being touted as the greatest male ballet dancer America ever produced, proving to his sandlot chums that ballet isn’t just for sissies. Villella has created a tizzy in Sun Valley’s ice skating and dance community the past two weeks as he’s worked with Ice Theatre of New York to infuse ballet elements into a romantic piece about unattainable love that he and Doug Webster choreographed to Pyotr Tchaikovsky’s “Orchestral Suite No. 3 in G’s Elegie.”

Their “Reverie,” as they call it, will premiere during a free ice show at 7:30 p.m. Oct. 2 at Sun Valley’s outdoor ice rink before Ice Theatre takes it on the road and back to New York. “Edward is an American dance treasure. He not only was the former principal ballet dancer of the New York City Ballet under George Balanchine, but he and his wife Linda—a skater—started Miami City Ballet, bringing it to international status,” said Hilarie Neely, director of

Footlight Dance. Now 77, Villella has two hip replacements, bad knees and a back that he says looks like the drive along the Amalfi Coast, given his misaligned vertebrae. And, he says, he’s lost a few inches from the days when he was performing grand jetes, or splits in the air. But he didn’t let any of that hold him back last week as he stood at the edge of the ice rink swaying his body and arms 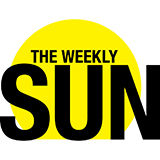