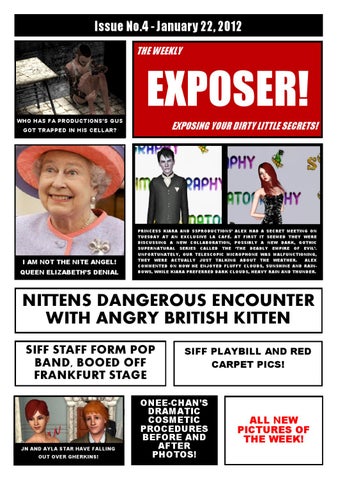 EXPOSER! WHO HAS FA PRODUCTIONS’S GUS

GOT TRAPPED IN HIS CELLAR?

I AM NOT THE NITE ANGEL! QUEEN ELIZABETH’S DENIAL

PRINCESS KIARA AND SSPRODUCTIONS’ ALEX HAD A SECRET MEETING ON TUESDAY AT AN EXCLUSIVE LA CAFÉ. AT FIRST IT SEEMED THEY WERE DISCUSSING A NEW COLLABORATION, POSSIBLY A NEW DARK, GOTHIC SUPERNATURAL SERIES CALLED THE ‘THE DEADLY EMPIRE OF EVIL’. UNFORTUNATELY, OUR TELESCOPIC MICROPHONE WAS MALFUNCTIONING, THEY WERE ACTUALLY JUST TALKING ABOUT THE WEATHER. ALEX COMMENTED ON HOW HE ENJOYED FLUFFY CLOUDS, SUNSHINE AND RAINBOWS, WHILE KIARA PREFERRED DARK CLOUDS, HEAVY RAIN AND THUNDER.

JN AND AYLA STAR HAVE FALLING OUT OVER GHERKINS!

ONEE-CHAN’S DRAMATIC COSMETIC PROCEDURES BEFORE AND AFTER PHOTOS!

ALL NEW PICTURES OF THE WEEK!

QUEEN BY DAY, PIRATE BY notion that I am a pirate is

absolutely preposterous!” the 85 old monarch stated in a televised broadcast earlier today. “My husband, my family and I arrrr deeply offended by the scandalous accusations by this pant-less terror.” Although she continues to publicly deny it, the evidence is beginning to

Queen Elizabeth II has spent the week trying to explain herself after it was revealed last week that she was the woman behind the mysterious character known only as the Nite Angel. “The

WHO HAS GUS GOT LOCKED IN HIS CELLAR? FA Production’s Gus is no stranger to scandal, but this time he could be facing jail time. After threatening to lock The Exposer in his cellar, an investigation took place at his home in Buenos Aires, Argentina. We found 16 people in total had been locked in the movie maker’s basement. While most of them were identified as Argentinean soap stars and rugby players, we were shocked to find several

stack up. Firstly, a former Royal servant claims to have found a cutlass, an eye patch and a skull and crossbones brooch in the queen’s underwear draw. Also, when on royal duty in Barbados, she insisted on taking a short voyage aboard the famous Caribbean pirate ship, Neptune’s Whore, where she f o rc e d h er gr an d - d au gh t er Princess Eugenie to walk the plank. There is also rumour that Her Royal Highness is putting pressure on England’s parliament to make arrangements to replace the decommissioned Royal Yacht Britannia, with a new £80 Million vessel that looks very pirate-y.

better-known celebrities, such as Morgan Freeman, Michael “The Situation” Sorrentino and Prison Break’s Wentworth Miller (pictured). When asked why he had these people locked in the basement, Gus denied there was anything sinister: “We were just having a party down there, someone must have accidently locked the door”. It’s r umore d th at G us employed the specialist security services of Logan the laughing blueberry to ensure they were not able to escape.

the Dryad, after she was caught stealing a jar of his prized gherkins. JN said in a statement: “She can take my car, my money or my children, but no-one messes with my gherkins”. The actress, who is best known for her role as Wendy King in The Kingdom, attempted to AYLA STAR DISMISSED down-play the seriousness of the crime: “I was just AFTER STEALING borrowing them for a prop in my new music video, GHERKINS sheesh!”. The flame-haired JN has announced that Kara starlet is set to release Daniels has been fired from her debut R&amp;B single titled her starring role in Ayla “My gherkins bring all the

boys to the yard.” JN announced that Monica Brow (below) will now be playing Ayla.

COMING ATTRACTIONS Check out the amazing line up so far for SIFF March 2012!

NITTENS BITTEN BY MITTENS THE KITTEN FROM BRITAIN Poor Nittens had to take time off his latest project this week to tend his wounds from a cat-attack. The director suffered cuts and abrasions to his face, shoulders, arms, legs and bottom after he was viciously mauled by his newly adopted kitten named Mittens. He thought the ONEE CHAN’S COSMETIC PROCEDURE ADDICTION

idea of a dynamic duo called “Nittens and Mittens” sounded like a good idea until the usually friendly-natured cat turned on him after a week. Our source suggests that Mittens is angry

about being shipped over from Britain to the United States. He, like many cats, had the dream of traveling to London to visit the Queen, and frightening a little mouse under her chair. With these hopes dashed, Mittens felt the urge to lash out at Nittens, causing physical and emotional damage. It is believed Nittens and Mittens are now attending group therapy to deal with their issues.

TOTAL: $48,000 RAIN CLOUDS FORM OVER SIMATOGRAPHY STAFF BAND When Alex Suggested to the Simatography staff team to form a pop band called “Rayz of Sunshine :)” they had dreams of grandeur. Little did they know that they would be booed off stage on their debut performance. The band, consisting of Minread, Alex, Bzanna, JN, Kazee, SylentWhysper, AAshleySEG and Midnight445 opened to a crowd of 5000 people at Schrecklich Shizer Events centre in Frankfurt Germany, singing their debut single OMG U R 4 Me. The group were unable to reach the chorus before they were forced to vacate the stage to avoid being injured from flying garbage. Unfortunately for the group the bad news didn’t end there. The single failed to chart in all seven countries it was released in. Industry expert Pauline Wan indicated that alt-

hough they had clear musical talent, she criticized the extremely profane lyrics: “It had the makings of a successful, catchy pop song, until they dropped the F-bomb”. The future of the band is now unclear, and there are rumors of conflict

between them. Midnight wants JN gone, as his hair color clashes with the outfits, and Kazee reportedly put laxatives in SylentWhysper’s food, as she tries to drown everyone out. Whether they stay on or not, noone’s listening anyway.

PICTURES Of the week

Each week The Exposer delves into the Simatography photo galleries to see how all of you have been behaving. As usual, the community had plenty of scandalous and distasteful activities caught on camera.

Guys? A little help? My freaking hand’s on fire!

Ok, jokes over Cactuar, take off that scream mask!

Just found another one trapped in FA’s cellar.

Right before I stomped on his fingers Mwahahahaha!