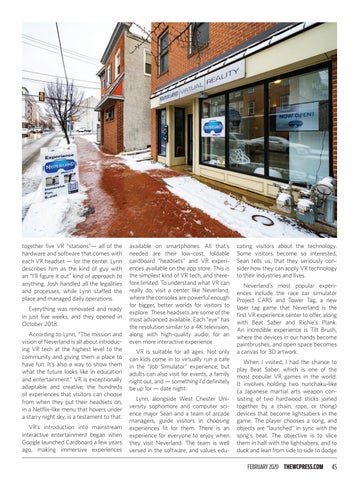 together five VR “stations”— all of the hardware and software that comes with each VR headset — for the center. Lynn describes him as the kind of guy with an “I’ll figure it out” kind of approach to anything. Josh handled all the legalities and processes, while Lynn staffed the place and managed daily operations. Everything was renovated and ready in just five weeks, and they opened in October 2018. According to Lynn, “The mission and vision of Neverland is all about introducing VR tech at the highest level to the community and giving them a place to have fun. It’s also a way to show them what the future looks like in education and entertainment.” VR is exceptionally adaptable and creative; the hundreds of experiences that visitors can choose from when they put their headsets on, in a Netflix-like menu that hovers under a starry night sky, is a testament to that. VR’s introduction into mainstream interactive entertainment began when Google launched Cardboard a few years ago, making immersive experiences

available on smartphones. All that’s needed are their low-cost, foldable cardboard “headsets” and VR experiences available on the app store. This is the simplest kind of VR tech, and therefore limited. To understand what VR can really do, visit a center like Neverland, where the consoles are powerful enough for bigger, better worlds for visitors to explore. These headsets are some of the most advanced available. Each “eye” has the resolution similar to a 4K television, along with high-quality audio, for an even more interactive experience. VR is suitable for all ages. Not only can kids come in to virtually run a cafe in the “Job Simulator” experience, but adults can also visit for events, a family night out, and — something I’d definitely be up for — date night. Lynn, alongside West Chester University sophomore and computer science major Sean and a team of arcade managers, guide visitors in choosing experiences fit for them. There is an experience for everyone to enjoy when they visit Neverland. The team is well versed in the software, and values edu-

cating visitors about the technology. Some visitors become so interested, Sean tells us, that they seriously consider how they can apply VR technology to their industries and lives. Neverland’s most popular experiences include the race car simulator Project CARS and Tower Tag, a new laser tag game that Neverland is the first VR experience center to offer, along with Beat Saber and Richie’s Plank. An incredible experience is Tilt Brush, where the devices in our hands become paintbrushes, and open space becomes a canvas for 3D artwork. When I visited, I had the chance to play Beat Saber, which is one of the most popular VR games in the world. It involves holding two nunchaku-like (a Japanese martial arts weapon consisting of two hardwood sticks joined together by a chain, rope, or thong) devices that become lightsabers in the game. The player chooses a song, and objects are “launched” in sync with the song’s beat. The objective is to slice them in half with the lightsabers, and to duck and lean from side to side to dodge