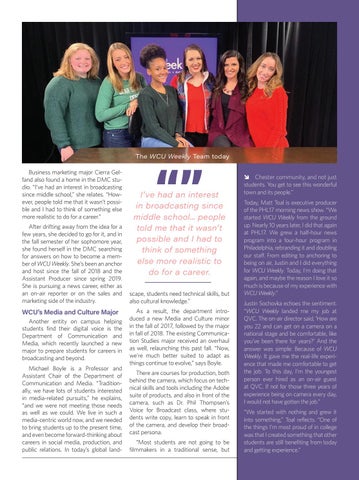 T h e W C U W e e k ly Te a m to d ay Business marketing major Cierra Gelfand also found a home in the DMC studio. “I’ve had an interest in broadcasting since middle school,” she relates. “However, people told me that it wasn’t possible and I had to think of something else more realistic to do for a career.” After drifting away from the idea for a few years, she decided to go for it, and in the fall semester of her sophomore year, she found herself in the DMC searching for answers on how to become a member of WCU Weekly. She’s been an anchor and host since the fall of 2018 and the Assistant Producer since spring 2019. She is pursuing a news career, either as an on-air reporter or on the sales and marketing side of the industry.

WCU’s Media and Culture Major Another entity on campus helping students find their digital voice is the Department of Communication and Media, which recently launched a new major to prepare students for careers in broadcasting and beyond. Michael Boyle is a Professor and Assistant Chair of the Department of Communication and Media. “Traditionally, we have lots of students interested in media-related pursuits,” he explains, “and we were not meeting those needs as well as we could. We live in such a media-centric world now, and we needed to bring students up to the present time, and even become forward-thinking about careers in social media, production, and public relations. In today’s global land-

I’ v e ha d a n inte re s t in b ro a d c a s ting s inc e m id d le s c ho ol... p e op le told m e tha t it wa s n’ t p o s s ib le a nd I ha d to think o f s om e thing e ls e m ore re a lis tic to d o for a c a re e r. scape, students need technical skills, but also cultural knowledge.” As a result, the department introduced a new Media and Culture minor in the fall of 2017, followed by the major in fall of 2018. The existing Communication Studies major received an overhaul as well, relaunching this past fall. “Now, we’re much better suited to adapt as things continue to evolve,” says Boyle. There are courses for production, both behind the camera, which focus on technical skills and tools including the Adobe suite of products, and also in front of the camera, such as Dr. Phil Thompsen’s Voice for Broadcast class, where students write copy, learn to speak in front of the camera, and develop their broadcast persona. “Most students are not going to be filmmakers in a traditional sense, but

 Chester community, and not just students. You get to see this wonderful town and its people.” Today, Matt Toal is executive producer of the PHL17 morning news show. “We started WCU Weekly from the ground up. Nearly 10 years later, I did that again at PHL17. We grew a half-hour news program into a four-hour program in Philadelphia, rebranding it and doubling our staff. From editing to anchoring to being on air, Justin and I did everything for WCU Weekly. Today, I’m doing that again, and maybe the reason I love it so much is because of my experience with WCU Weekly.” Justin Sochovka echoes the sentiment. “WCU Weekly landed me my job at QVC. The on-air director said, ‘How are you 22 and can get on a camera on a national stage and be comfortable, like you’ve been there for years?’ And the answer was simple: Because of WCU Weekly. It gave me the real-life experience that made me comfortable to get the job. To this day, I’m the youngest person ever hired as an on-air guest at QVC. If not for those three years of experience being on camera every day, I would not have gotten the job.” “We started with nothing and grew it into something,” Toal reflects. “One of the things I’m most proud of in college was that I created something that other students are still benefiting from today and getting experience.”