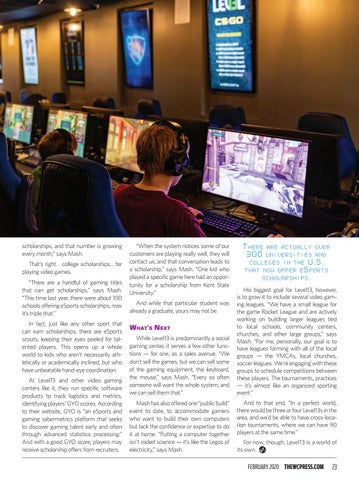 scholarships, and that number is growing every month,” says Mash. That’s right… college scholarships... for playing video games. “There are a handful of gaming titles that can get scholarships,” says Mash. “This time last year, there were about 100 schools offering eSports scholarships, now it’s triple that.” In fact, just like any other sport that can earn scholarships, there are eSports scouts, keeping their eyes peeled for talented players. This opens up a whole world to kids who aren’t necessarily athletically or academically inclined, but who have unbeatable hand-eye coordination. At Level13 and other video gaming centers like it, they run specific software products to track logistics and metrics, identifying players’ GYO scores. According to their website, GYO is “an eSports and gaming sabermetrics platform that seeks to discover gaming talent early and often through advanced statistics processing.” And with a good GYO score, players may receive scholarship offers from recruiters.

“When the system notices some of our customers are playing really well, they will contact us, and that conversation leads to a scholarship,” says Mash. “One kid who played a specific game here had an opportunity for a scholarship from Kent State University.” And while that particular student was already a graduate, yours may not be.

What's Next While Level13 is predominantly a social gaming center, it serves a few other functions — for one, as a sales avenue. “We don’t sell the games, but we can sell some of the gaming equipment, the keyboard, the mouse,” says Mash. “Every so often someone will want the whole system, and we can sell them that.” Mash has also offered one “public build” event to date, to accommodate gamers who want to build their own computers but lack the confidence or expertise to do it at home. “Putting a computer together isn’t rocket science — it’s like the Legos of electricity,” says Mash.

His biggest goal for Level13, however, is to grow it to include several video gaming leagues. “We have a small league for the game Rocket League and are actively working on building larger leagues tied to local schools, community centers, churches, and other large groups,” says Mash. “For me, personally, our goal is to have leagues forming with all of the local groups — the YMCAs, local churches, soccer leagues. We’re engaging with these groups to schedule competitions between these players. The tournaments, practices — it’s almost like an organized sporting event.” And to that end, “In a perfect world, there would be three or four Level13s in the area, and we’d be able to have cross-location tournaments, where we can have 90 players at the same time.” For now, though, Level13 is a world of its own.