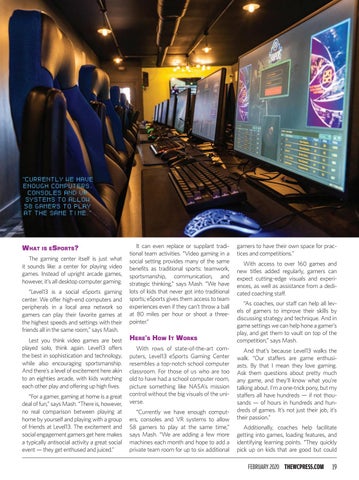 What is eSports? The gaming center itself is just what it sounds like: a center for playing video games. Instead of upright arcade games, however, it’s all desktop computer gaming. “Level13 is a social eSports gaming center. We offer high-end computers and peripherals in a local area network so gamers can play their favorite games at the highest speeds and settings with their friends all in the same room,” says Mash. Lest you think video games are best played solo, think again. Level13 offers the best in sophistication and technology, while also encouraging sportsmanship. And there’s a level of excitement here akin to an eighties arcade, with kids watching each other play and offering up high fives. “For a gamer, gaming at home is a great deal of fun,” says Mash. “There is, however, no real comparison between playing at home by yourself and playing with a group of friends at Level13. The excitement and social engagement gamers get here makes a typically antisocial activity a great social event — they get enthused and juiced.”

It can even replace or supplant traditional team activities. “Video gaming in a social setting provides many of the same benefits as traditional sports: teamwork, sportsmanship, communication, and strategic thinking,” says Mash. “We have lots of kids that never got into traditional sports; eSports gives them access to team experiences even if they can’t throw a ball at 80 miles per hour or shoot a threepointer.”

Here's How It Works With rows of state-of-the-art computers, Level13 eSports Gaming Center resembles a top-notch school computer classroom. For those of us who are too old to have had a school computer room, picture something like NASA’s mission control without the big visuals of the universe. “Currently we have enough computers, consoles and VR systems to allow 58 gamers to play at the same time,” says Mash. “We are adding a few more machines each month and hope to add a private team room for up to six additional

gamers to have their own space for practices and competitions.” With access to over 160 games and new titles added regularly, gamers can expect cutting-edge visuals and experiences, as well as assistance from a dedicated coaching staff. “As coaches, our staff can help all levels of gamers to improve their skills by discussing strategy and technique. And in game settings we can help hone a gamer’s play, and get them to vault on top of the competition,” says Mash. And that’s because Level13 walks the walk. “Our staffers are game enthusiasts. By that I mean they love gaming. Ask them questions about pretty much any game, and they’ll know what you’re talking about. I’m a one-trick pony, but my staffers all have hundreds — if not thousands — of hours in hundreds and hundreds of games. It’s not just their job, it’s their passion.” Additionally, coaches help facilitate getting into games, loading features, and identifying learning points. “They quickly pick up on kids that are good but could