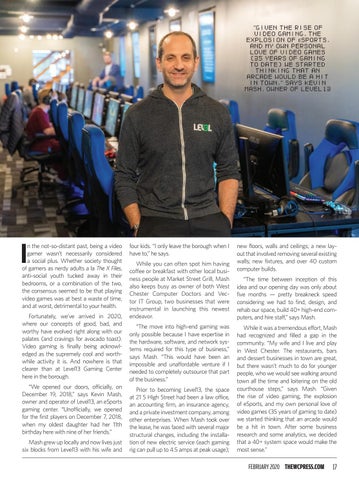 n the not-so-distant past, being a video gamer wasn’t necessarily considered a social plus. Whether society thought of gamers as nerdy adults a la The X Files, anti-social youth tucked away in their bedrooms, or a combination of the two, the consensus seemed to be that playing video games was at best a waste of time, and at worst, detrimental to your health. Fortunately, we’ve arrived in 2020, where our concepts of good, bad, and worthy have evolved right along with our palates (and cravings for avocado toast). Video gaming is finally being acknowledged as the supremely cool and worthwhile activity it is. And nowhere is that clearer than at Level13 Gaming Center here in the borough. “We opened our doors, officially, on December 19, 2018,” says Kevin Mash, owner and operator of Level13, an eSports gaming center. “Unofficially, we opened for the first players on December 7, 2018, when my oldest daughter had her 11th birthday here with nine of her friends.” Mash grew up locally and now lives just six blocks from Level13 with his wife and

four kids. “I only leave the borough when I have to,” he says. While you can often spot him having coffee or breakfast with other local business people at Market Street Grill, Mash also keeps busy as owner of both West Chester Computer Doctors and Vector IT Group, two businesses that were instrumental in launching this newest endeavor. “The move into high-end gaming was only possible because I have expertise in the hardware, software, and network systems required for this type of business,” says Mash. “This would have been an impossible and unaffordable venture if I needed to completely outsource that part of the business.” Prior to becoming Level13, the space at 21 S High Street had been a law office, an accounting firm, an insurance agency, and a private investment company, among other enterprises. When Mash took over the lease, he was faced with several major structural changes, including the installation of new electric service (each gaming rig can pull up to 4.5 amps at peak usage);

new floors, walls and ceilings; a new layout that involved removing several existing walls; new fixtures, and over 40 custom computer builds. “The time between inception of this idea and our opening day was only about five months — pretty breakneck speed considering we had to find, design, and rehab our space, build 40+ high-end computers, and hire staff,” says Mash. While it was a tremendous effort, Mash had recognized and filled a gap in the community. “My wife and I live and play in West Chester. The restaurants, bars and dessert businesses in town are great, but there wasn’t much to do for younger people, who we would see walking around town all the time and loitering on the old courthouse steps,” says Mash. “Given the rise of video gaming, the explosion of eSports, and my own personal love of video games (35 years of gaming to date) we started thinking that an arcade would be a hit in town. After some business research and some analytics, we decided that a 40+ system space would make the most sense.”