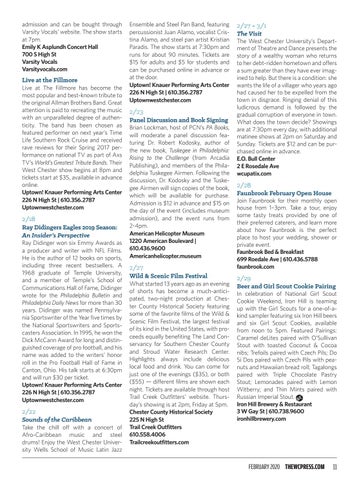 Live at the Fillmore

Live at The Fillmore has become the most popular and best-known tribute to the original Allman Brothers Band. Great attention is paid to recreating the music with an unparalleled degree of authenticity. The band has been chosen as featured performer on next year’s Time Life Southern Rock Cruise and received rave reviews for their Spring 2017 performance on national TV as part of Axs TV’s World’s Greatest Tribute Bands. Their West Chester show begins at 8pm and tickets start at $35, available in advance online. Uptown! Knauer Performing Arts Center 226 N High St | 610.356.2787 Uptownwestchester.com

Ray Didinger won six Emmy Awards as a producer and writer with NFL Films. He is the author of 12 books on sports, including three recent bestsellers. A 1968 graduate of Temple University, and a member of Temple’s School of Communications Hall of Fame, Didinger wrote for the Philadelphia Bulletin and Philadelphia Daily News for more than 30 years. Didinger was named Pennsylvania Sportswriter of the Year five times by the National Sportswriters and Sportscasters Association. In 1995, he won the Dick McCann Award for long and distinguished coverage of pro football, and his name was added to the writers’ honor roll in the Pro Football Hall of Fame in Canton, Ohio. His talk starts at 6:30pm and will run $30 per ticket. Uptown! Knauer Performing Arts Center 226 N High St | 610.356.2787 Uptownwestchester.com

2/22 Sounds of the Caribbean

Take the chill off with a concert of Afro-Caribbean music and steel drums! Enjoy the West Chester University Wells School of Music Latin Jazz

Ensemble and Steel Pan Band, featuring percussionist Juan Alamo, vocalist Cristina Alamo, and steel pan artist Kristian Paradis. The show starts at 7:30pm and runs for about 90 minutes. Tickets are $15 for adults and $5 for students and can be purchased online in advance or at the door. Uptown! Knauer Performing Arts Center 226 N High St | 610.356.2787 Uptownwestchester.com

Brian Lockman, host of PCN’s PA Books, will moderate a panel discussion featuring Dr. Robert Kodosky, author of the new book, Tuskegee in Philadelphia: Rising to the Challenge (from Arcadia Publishing), and members of the Philadelphia Tuskegee Airmen. Following the discussion, Dr. Kodosky and the Tuskegee Airmen will sign copies of the book, which will be available for purchase. Admission is $12 in advance and $15 on the day of the event (includes museum admission), and the event runs from 2-4pm. American Helicopter Museum 1220 American Boulevard | 610.436.9600 Americanhelicopter.museum

What started 13 years ago as an evening of shorts has become a much-anticipated, two-night production at Chester County Historical Society featuring some of the favorite films of the Wild & Scenic Film Festival, the largest festival of its kind in the United States, with proceeds equally benefiting The Land Conservancy for Southern Chester County and Stroud Water Research Center. Highlights always include delicious local food and drink. You can come for just one of the evenings ($35), or both ($55) — different films are shown each night. Tickets are available through host Trail Creek Outfitters’ website. Thursday’s showing is at 2pm, Friday at 5pm. Chester County Historical Society 225 N High St Trail Creek Outfitters 610.558.4006 Trailcreekoutfitters.com

The West Chester University’s Department of Theatre and Dance presents the story of a wealthy woman who returns to her debt-ridden hometown and offers a sum greater than they have ever imagined to help. But there is a condition: she wants the life of a villager who years ago had caused her to be expelled from the town in disgrace. Ringing denial of this ludicrous demand is followed by the gradual corruption of everyone in town. What does the town decide? Showings are at 7:30pm every day, with additional matinee shows at 2pm on Saturday and Sunday. Tickets are $12 and can be purchased online in advance. E.O. Bull Center 2 E Rosedale Ave wcupatix.com

Join Faunbrook for their monthly open house from 1–3pm. Take a tour, enjoy some tasty treats provided by one of their preferred caterers, and learn more about how Faunbrook is the perfect place to host your wedding, shower or private event. Faunbrook Bed & Breakfast 699 Roedale Ave | 610.436.5788 faunbrook.com