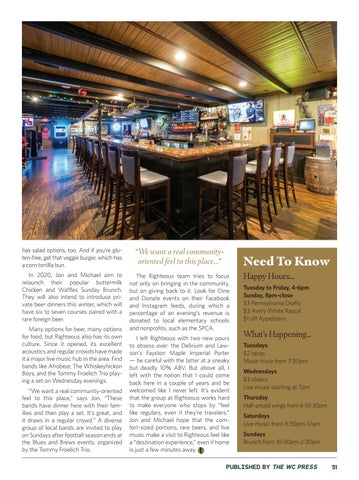 has salad options, too. And if you’re gluten-free, get that veggie burger, which has a corn tortilla bun.

“We want a real communityoriented feel to this place...”

In 2020, Jon and Michael aim to relaunch their popular buttermilk Chicken and Waffles Sunday Brunch. They will also intend to introduce private beer dinners this winter, which will have six to seven courses paired with a rare foreign beer.

The Righteous team tries to focus not only on bringing in the community, but on giving back to it. Look for Dine and Donate events on their Facebook and Instagram feeds, during which a percentage of an evening’s revenue is donated to local elementary schools and nonprofits, such as the SPCA.

Many options for beer, many options for food, but Righteous also has its own culture. Since it opened, its excellent acoustics and regular crowds have made it a major live music hub in the area. Find bands like Afrobear, The Whiskeyhickon Boys, and the Tommy Froelich Trio playing a set on Wednesday evenings. “We want a real community-oriented feel to this place,” says Jon, “These bands have dinner here with their families and then play a set. It’s great, and it draws in a regular crowd." A diverse group of local bands are invited to play on Sundays after football season ends at the Blues and Brews events, organized by the Tommy Froelich Trio.

I left Righteous with two new pours to obsess over: the Delirium and Lawson’s Fayston Maple Imperial Porter — be careful with the latter at a sneaky but deadly 10% ABV. But above all, I left with the notion that I could come back here in a couple of years and be welcomed like I never left. It’s evident that the group at Righteous works hard to make everyone who stops by “feel like regulars, even if they’re travelers.” Jon and Michael hope that the comfort-sized portions, rare beers, and live music make a visit to Righteous feel like a “destination experience,” even if home is just a few minutes away.