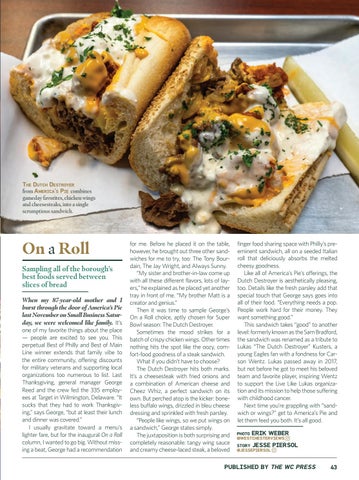 On a Roll Sampling all of the borough’s best foods served between slices of bread When my 87-year-old mother and I burst through the door of America’s Pie last November on Small Business Saturday, we were welcomed like family. It’s one of my favorite things about the place — people are excited to see you. This perpetual Best of Philly and Best of Main Line winner extends that family vibe to the entire community, offering discounts for military veterans and supporting local organizations too numerous to list. Last Thanksgiving, general manager George Reed and the crew fed the 335 employees at Target in Wilmington, Delaware. “It sucks that they had to work Thanksgiving,” says George, “but at least their lunch and dinner was covered.” I usually gravitate toward a menu’s lighter fare, but for the inaugural On a Roll column, I wanted to go big. Without missing a beat, George had a recommendation

for me. Before he placed it on the table, however, he brought out three other sandwiches for me to try, too: The Tony Bourdain, The Jay Wright, and Always Sunny. “My sister and brother-in-law come up with all these different flavors, lots of layers,” he explained as he placed yet another tray in front of me. “My brother Matt is a creator and genius.” Then it was time to sample George’s On a Roll choice, aptly chosen for Super Bowl season: The Dutch Destroyer. Sometimes the mood strikes for a batch of crispy chicken wings. Other times nothing hits the spot like the oozy, comfort-food goodness of a steak sandwich. What if you didn’t have to choose? The Dutch Destroyer hits both marks. It’s a cheesesteak with fried onions and a combination of American cheese and Cheez Whiz, a perfect sandwich on its own. But perched atop is the kicker: boneless buffalo wings, drizzled in bleu cheese dressing and sprinkled with fresh parsley. “People like wings, so we put wings on a sandwich,” George states simply. The juxtaposition is both surprising and completely reasonable: tangy wing sauce and creamy cheese-laced steak, a beloved

finger food sharing space with Philly’s preeminent sandwich, all on a seeded Italian roll that deliciously absorbs the melted cheesy goodness. Like all of America’s Pie’s offerings, the Dutch Destroyer is aesthetically pleasing, too. Details like the fresh parsley add that special touch that George says goes into all of their food. “Everything needs a pop. People work hard for their money. They want something good.” This sandwich takes “good” to another level: formerly known as the Sam Bradford, the sandwich was renamed as a tribute to Lukas “The Dutch Destroyer” Kusters, a young Eagles fan with a fondness for Carson Wentz. Lukas passed away in 2017, but not before he got to meet his beloved team and favorite player, inspiring Wentz to support the Live Like Lukas organization and its mission to help those suffering with childhood cancer. Next time you’re grappling with “sandwich or wings?” get to America’s Pie and let them feed you both. It’s all good. photo ERIK WEBER @westchesterviews story JESSE @jessepiersol