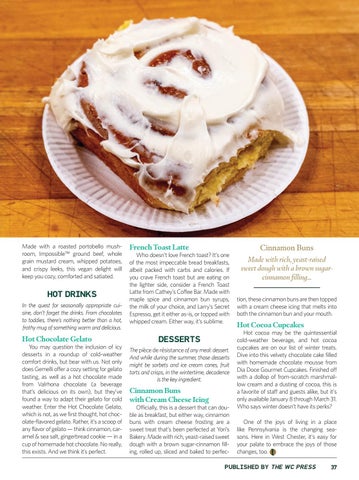 HOT DRINKS In the quest for seasonally appropriate cuisine, don’t forget the drinks. From chocolates to toddies, there’s nothing better than a hot, frothy mug of something warm and delicious.

You may question the inclusion of icy desserts in a roundup of cold-weather comfort drinks, but bear with us. Not only does Gemelli offer a cozy setting for gelato tasting, as well as a hot chocolate made from Valrhona chocolate (a beverage that’s delicious on its own), but they’ve found a way to adapt their gelato for cold weather. Enter the Hot Chocolate Gelato, which is not, as we first thought, hot chocolate-flavored gelato. Rather, it’s a scoop of any flavor of gelato — think cinnamon, caramel & sea salt, gingerbread cookie — in a cup of homemade hot chocolate. No really, this exists. And we think it’s perfect.

Who doesn’t love French toast? It’s one of the most impeccable bread breakfasts, albeit packed with carbs and calories. If you crave French toast but are eating on the lighter side, consider a French Toast Latte from Cathey’s Coffee Bar. Made with maple spice and cinnamon bun syrups, the milk of your choice, and Larry’s Secret Espresso, get it either as-is, or topped with whipped cream. Either way, it’s sublime.

DESSERTS The pièce de résistance of any meal: dessert. And while during the summer, those desserts might be sorbets and ice cream cones, fruit tarts and crisps, in the wintertime, decadence is the key ingredient.

Officially, this is a dessert that can double as breakfast, but either way, cinnamon buns with cream cheese frosting are a sweet treat that's been perfected at Yori’s Bakery. Made with rich, yeast-raised sweet dough with a brown sugar-cinnamon filling, rolled up, sliced and baked to perfec-

Cinnamon Buns Made with rich, yeast-raised sweet dough with a brown sugarcinnamon filling... tion, these cinnamon buns are then topped with a cream cheese icing that melts into both the cinnamon bun and your mouth.

Hot cocoa may be the quintessential cold-weather beverage, and hot cocoa cupcakes are on our list of winter treats. Dive into this velvety chocolate cake filled with homemade chocolate mousse from Dia Doce Gourmet Cupcakes. Finished off with a dollop of from-scratch marshmallow cream and a dusting of cocoa, this is a favorite of staff and guests alike, but it's only available January 8 through March 31. Who says winter doesn't have its perks? One of the joys of living in a place like Pennsylvania is the changing seasons. Here in West Chester, it's easy for your palate to embrace the joys of those changes, too.