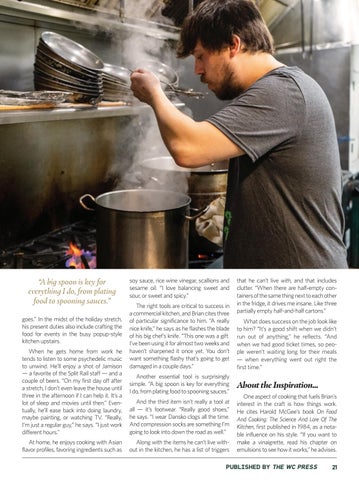 “A big spoon is key for everything I do, from plating food to spooning sauces.” goes.” In the midst of the holiday stretch, his present duties also include crafting the food for events in the busy popup-style kitchen upstairs. When he gets home from work he tends to listen to some psychedelic music to unwind. He’ll enjoy a shot of Jamison — a favorite of the Split Rail staff — and a couple of beers. “On my first day off after a stretch, I don’t even leave the house until three in the afternoon if I can help it. It’s a lot of sleep and movies until then.” Eventually, he’ll ease back into doing laundry, maybe painting, or watching TV. “Really, I’m just a regular guy,” he says. “I just work different hours.” At home, he enjoys cooking with Asian flavor profiles, favoring ingredients such as

soy sauce, rice wine vinegar, scallions and sesame oil. “I love balancing sweet and sour, or sweet and spicy.” The right tools are critical to success in a commercial kitchen, and Brian cites three of particular significance to him. “A really nice knife,” he says as he flashes the blade of his big chef’s knife. “This one was a gift. I’ve been using it for almost two weeks and haven’t sharpened it once yet. You don’t want something flashy that’s going to get damaged in a couple days.” Another essential tool is surprisingly simple. “A big spoon is key for everything I do, from plating food to spooning sauces.” And the third item isn’t really a tool at all — it’s footwear. “Really good shoes,” he says. “I wear Dansko clogs all the time. And compression socks are something I’m going to look into down the road as well.” Along with the items he can’t live without in the kitchen, he has a list of triggers

that he can’t live with, and that includes clutter. “When there are half-empty containers of the same thing next to each other in the fridge, it drives me insane. Like three partially empty half-and-half cartons.” What does success on the job look like to him? “It’s a good shift when we didn’t run out of anything,” he reflects. “And when we had good ticket times, so people weren’t waiting long for their meals — when everything went out right the first time.”

About the Inspiration... One aspect of cooking that fuels Brian’s interest in the craft is how things work. He cites Harold McGee’s book On Food And Cooking: The Science And Lore Of The Kitchen, first published in 1984, as a notable influence on his style. “If you want to make a vinaigrette, read his chapter on emulsions to see how it works,” he advises.