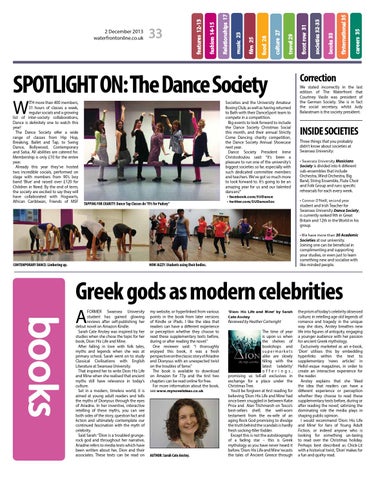 SPOTLIGHT ON: The Dance Society

ITH more than 400 members, 31 hours of classes a week, regular socials and a growing list of inter-society collaborations, Dance is definitely one to watch this year! The Dance Society offer a wide range of classes from Hip Hop, Breaking, Ballet and Tap, to Swing Dance, Bollywood, Contemporary and Salsa. All abilities are catered for. Membership is only £10 for the entire year. Already this year they’ve hosted two incredible socials, performed on stage with members from 90’s boy band ‘Blue’ and raised over £120 for Children in Need. By the end of term, the society are excited to say they will have collaborated with Hogwarts, African Caribbean, Friends of MSF

TAPPING FOR CHARITY: Dance Tap Classes do “PJ’s for Pudsey”

Societies and the University Amateur Boxing Club, as well as having returned to Bath with their DanceSport team to compete in a competition. Big events to look forward to include the Dance Society Christmas Social this month, and their annual Strictly Come Dancing charity competition, the Dance Society Annual Showcase next year. Dance Society President Irene Christodoulou said: “It’s been a pleasure to run one of the university’s biggest societies so far, especially with such dedicated committee members and teachers. We’ve got so much more to look forward to. It’s going to be an amazing year for us and our talented dancers!” • facebook.com/SUDance • twitter.com/SUDanceSoc

Correction We stated incorrectly in the last edition of The Waterfront that Courtney Vasile was president of the German Society. She is in fact the social secretary, whilst Judy Balaratnam is the society president.

INSIDE SOCIETIES Three things that you probably didn’t know about societies at Swansea University: • Swansea University Musicians Society is divided into 6 different sub-ensembles that include Orchestra, Wind Orchestra, Big Band, String Ensemble, Flute Choir and Folk Group and runs specific rehearsals for each every week. • Connor O’Neill, second year student and Irish Teacher for Swansea University Dance Society, is currently ranked 9th in Great Britain and 12th in the World in his group. • We have more than 30 Academic Societies at our university. Joining one can be beneficial in complimenting and supporting your studies, or even just to learn something new and socialise with like-minded people.

HOW JAZZY: Students using their bodies.

FORMER Swansea University student has gained glowing reviews after self-publishing her debut novel on Amazon Kindle. Sarah Cate Anstey was inspired by her studies when she chose the topic for her book, Dion: His Life and Mine. After falling in love with folk tales, myths and legends when she was at primary school, Sarah went on to study Classical Civilisations with English Literature at Swansea University. That inspired her to write Dion: His Life and Mine when she realised that ancient myths still have relevance in today’s culture. Set in a modern, timeless world, it is aimed at young adult readers and tells the myths of Dionysus through the eyes of Ariadne. In her inventive, interactive retelling of these myths, you can see both sides of the story, question fact and fiction and ultimately contemplate our continued fascination with the myth of celebrity. Said Sarah: “Dion is a troubled grungerock god and throughout her narrative, Ariadne refers to media texts which have been written about her, Dion and their associates. These texts can be read on

my website, or hyperlinked from various points in the book from later versions of Kindle or iPads. I like the idea that readers can have a different experience or perception whether they choose to read these supplementary texts before, during or after reading the novel.” One reviewer said: “I thoroughly enjoyed this book, it was a fresh perspective on the classic story of Ariadne and Dionysus with an unexpected twist on the troubles of fame.” The book is available to download on Amazon for 77p and the first two chapters can be read online for free. For more information about the book, see www.mynovelideas.co.uk

‘Dion: His Life and Mine’ by Sarah Cate Anstey Reviewed by Heather Cartwright The time of year is upon us when the shelves of bookshops and supermarkets alike are slowly filling with the latest ‘celebrity’ offerings, promising us tell-all exclusives in exchange for a place under the Christmas Tree. You’d be forgiven at first reading for believing ‘Dion: His Life and Mine’ had once been snuggled in between Katie Price and Alan Titchmarsh on Tesco’s best-sellers shelf, the well-worn testament from the ex-wife of an aging Rock God promising to divulge the truth behind the scandals is hardly fresh socking-filler fodder. Except this is not the autobiography of a fading star – this is Greek mythology as you have never heard it before. ‘Dion: His Life and Mine’ recasts the tales of Ancient Greece through

the prism of today’s celebrity obsessed culture; in retelling age old legends of romance and tragedy in the unique way she does, Anstey breathes new life into figures of antiquity, engaging a younger audience with her passion for ancient Greek mythology. Exclusively marketed as an e-book, ‘Dion’ utilises this by embedding hyperlinks within the text to supplementary ‘news articles’ in Hello!-esque magazines, in order to create an interactive experience for the reader. Anstey explains that she ‘liked the idea that readers can have a different experience or perception whether they choose to read these supplementary texts before, during or after reading the novel’, satirising the dominating role the media plays in shaping public opinion. I would recommend ‘Dion: His Life and Mine’ for fans of Young Adult Fiction, or indeed anyone who is looking for something un-taxing to read over the Christmas holiday. Perhaps best described as Chick-Lit with a historical twist, ‘Dion’ makes for a fun and quirky read. 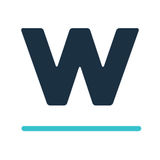