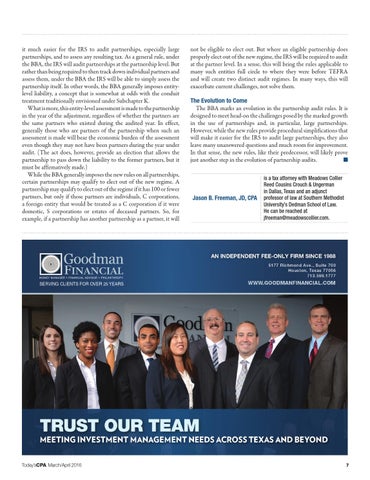 it much easier for the IRS to audit partnerships, especially large partnerships, and to assess any resulting tax. As a general rule, under the BBA, the IRS will audit partnerships at the partnership level. But rather than being required to then track down individual partners and assess them, under the BBA the IRS will be able to simply assess the partnership itself. In other words, the BBA generally imposes entitylevel liability, a concept that is somewhat at odds with the conduit treatment traditionally envisioned under Subchapter K. What is more, this entity-level assessment is made to the partnership in the year of the adjustment, regardless of whether the partners are the same partners who existed during the audited year. In effect, generally those who are partners of the partnership when such an assessment is made will bear the economic burden of the assessment even though they may not have been partners during the year under audit. (The act does, however, provide an election that allows the partnership to pass down the liability to the former partners, but it must be affirmatively made.) While the BBA generally imposes the new rules on all partnerships, certain partnerships may qualify to elect out of the new regime. A partnership may qualify to elect out of the regime if it has 100 or fewer partners, but only if those partners are individuals, C corporations, a foreign entity that would be treated as a C corporation if it were domestic, S corporations or estates of deceased partners. So, for example, if a partnership has another partnership as a partner, it will

not be eligible to elect out. But where an eligible partnership does properly elect out of the new regime, the IRS will be required to audit at the partner level. In a sense, this will bring the rules applicable to many such entities full circle to where they were before TEFRA and will create two distinct audit regimes. In many ways, this will exacerbate current challenges, not solve them.

is a tax attorney with Meadows Collier Reed Cousins Crouch & Ungerman in Dallas, Texas and an adjunct professor of law at Southern Methodist Universityâ&#x20AC;&#x2122;s Dedman School of Law. He can be reached at jfreeman@meadowscollier.com.

In this issue, the past performance and future expectations of the Texas economy; understanding OMB’s changes for federal awards; and fraud...

In this issue, the past performance and future expectations of the Texas economy; understanding OMB’s changes for federal awards; and fraud...