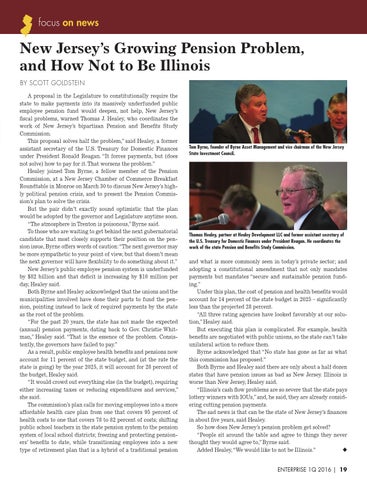 New Jersey’s Growing Pension Problem, and How Not to Be Illinois BY SCOTT GOLDSTEIN A proposal in the Legislature to constitutionally require the state to make payments into its massively underfunded public employee pension fund would deepen, not help, New Jersey’s fiscal problems, warned Thomas J. Healey, who coordinates the work of New Jersey’s bipartisan Pension and Benefits Study Commission. This proposal solves half the problem,” said Healey, a former assistant secretary of the U.S. Treasury for Domestic Finances under President Ronald Reagan. “It forces payments, but (does not solve) how to pay for it. That worsens the problem.” Healey joined Tom Byrne, a fellow member of the Pension Commission, at a New Jersey Chamber of Commerce Breakfast Roundtable in Monroe on March 30 to discuss New Jersey’s highly political pension crisis, and to present the Pension Commission’s plan to solve the crisis. But the pair didn’t exactly sound optimistic that the plan would be adopted by the governor and Legislature anytime soon. “The atmosphere in Trenton is poisonous,” Byrne said. To those who are waiting to get behind the next gubernatorial candidate that most closely supports their position on the pension issue, Byrne offers words of caution: “The next governor may be more sympathetic to your point of view, but that doesn’t mean the next governor will have flexibility to do something about it.” New Jersey’s public employee pension system is underfunded by $82 billion and that deficit is increasing by $10 million per day, Healey said. Both Byrne and Healey acknowledged that the unions and the municipalities involved have done their parts to fund the pension, pointing instead to lack of required payments by the state as the root of the problem. “For the past 20 years, the state has not made the expected (annual) pension payments, dating back to Gov. Christie Whitman,” Healey said. “That is the essence of the problem. Consistently, the governors have failed to pay.” As a result, public employee health benefits and pensions now account for 11 percent of the state budget, and (at the rate the state is going) by the year 2025, it will account for 28 percent of the budget, Healey said. “It would crowd out everything else (in the budget), requiring either increasing taxes or reducing expenditures and services,” she said. The commission’s plan calls for moving employees into a more affordable health care plan from one that covers 95 percent of health costs to one that covers 78 to 82 percent of costs; shifting public school teachers in the state pension system to the pension system of local school districts; freezing and protecting pensioners’ benefits to date, while transitioning employees into a new type of retirement plan that is a hybrid of a traditional pension

Thomas Healey, partner at Healey Development LLC and former assistant secretary of the U.S. Treasury for Domestic Finances under President Reagan. He coordinates the work of the state Pension and Benefits Study Commission.

and what is more commonly seen in today’s private sector; and adopting a constitutional amendment that not only mandates payments but mandates “secure and sustainable pension funding.” Under this plan, the cost of pension and health benefits would account for 14 percent of the state budget in 2025 – significantly less than the projected 28 percent. “All three rating agencies have looked favorably at our solution,” Healey said. But executing this plan is complicated. For example, health benefits are negotiated with public unions, so the state can’t take unilateral action to reduce them. Byrne acknowledged that “No state has gone as far as what this commission has proposed.” Both Byrne and Healey said there are only about a half dozen states that have pension issues as bad as New Jersey. Illinois is worse than New Jersey, Healey said. “Illinois’s cash flow problems are so severe that the state pays lottery winners with IOUs,” and, he said, they are already considering cutting pension payments. The sad news is that can be the state of New Jersey’s finances in about five years, said Healey. So how does New Jersey’s pension problem get solved? “People sit around the table and agree to things they never thought they would agree to,” Byrne said. Added Healey, “We would like to not be Illinois.” ◆ ENTERPRISE 1Q 2016 | 19

In this issue, state officials race to fill the Transportation Trust Fund, New Jersey companies aim to inspire their employees, and Christie...

In this issue, state officials race to fill the Transportation Trust Fund, New Jersey companies aim to inspire their employees, and Christie...