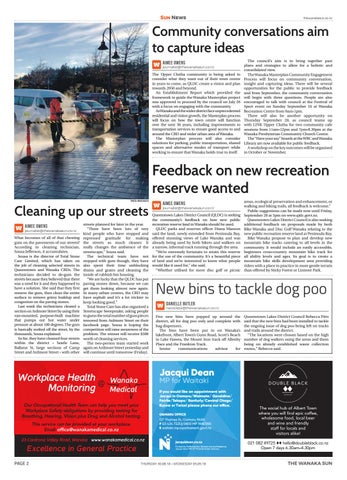 The Upper Clutha community is being asked to consider what they want out of their town centre in years to come, as QLDC create a vision and plan towards 2050 and beyond. An Establishment Report which provided the framework to guide the Wanaka Masterplan project was approved to proceed by the council on July 26 with a focus on engaging with the community. AsWanaka and the wider district face unprecedented residential and visitor growth, the Masterplan process will focus on how the town centre will function over the next 30 years, including improvements to transportation services to ensure good access to and around the CBD and wider urban area of Wanaka. The Masterplan process will also consider solutions for parking, public transportation, shared spaces and alternative modes of transport while working to ensure that Wanaka holds true to itself.

The council’s aim is to bring together past plans and strategies to allow for a holistic and consolidated view. The Wanaka Masterplan Community Engagement Process will focus on community conversation, insight and capturing ideas. There will be several opportunities for the public to provide feedback and from September, the community conversation will begin with three questions. People are also encouraged to talk with council at the Festival of Sport event on Sunday September 16 at Wanaka Recreation Centre from 9am-1pm. There will also be another opportunity on Thursday September 20, as council teams up with LINK Upper Clutha for two community cafe sessions from 11am-12pm and 7pm-8.30pm at the Wanaka Presbyterian Community Church Centre. The “Have your say” boards at the WRC and Wanaka Library are now available for public feedback. A workshop on the key outcomes will be organised in October or November.

Cleaning up our streets Aimee Owens

What becomes of all of that chewing gum on the pavements of our streets? According to cleaning technician, Sousa Jefferson, it accumulates. Sousa is the director of Total Stone Care Limited, which has taken on the job of cleaning selected streets in Queenstown and Wanaka CBDs. The technicians decided to de-gum the streets because they believed that there was a need for it and they happened to have a solution. She said that they first remove the gum, then clean the entire surface to remove grimy buildup and congestion on the paving stones. Last week the technicians cleared a section on Ardmore Street by using their van-mounted, purpose-built machine that pumps out hot water under pressure at about 100 degrees. The gum is basically melted off the street, by the thousands, Sousa explained. So far, they have cleaned four streets within the district - Searle Lane, Ballarat St, large sections of Camp Street and Ardmore Street - with other

streets planned for later in the year. “There have been lots of very kind people who have stopped and expressed gratitude for making the streets so much cleaner. It really changes the ambience of the streetscape,” Sousa said. The technical team have not stopped with gum though, they have also spent their time unblocking drains and grates and cleaning the inside of rubbish bin housing. “We are lucky that the QLDC has put paving stones down, because we can get them looking almost new again. In many urban centres, the CBD may have asphalt and it’s a lot trickier to keep looking good.” Total Stone Care has also organised a Streetscape Sweepstake, asking people to guess the total number of gum pieces removed from Ardmore Street on their facebook page. Sousa is hoping the competition will raise awareness of the problem. The winner will receive $500 worth of cleaning services. The two-person team started work again on Ardmore Street yesterday and will continue until tomorrow (Friday).

Queenstown Lakes District Council (QLDC) is seeking the community’s feedback on how new public recreation reserve land in Wanaka should be used. QLDC parks and reserves officer Diana Manson said the land, newly extended from Peninsula Bay, offered stunning views of Lake Wanaka and was already being used by both bikers and walkers on a narrow, informal track running through the area. “We’re extremely fortunate to retain this reserve for the use of the community. It’s a beautiful piece of land and we’re interested to know what people would like it used for,” she said. “Whether utilised for more disc golf or picnic

areas, ecological preservation and enhancement, or walking and biking trails, all feedback is welcome.” Public suggestions can be made now until Friday, September 28 at 5pm on www.qldc.govt.nz. Queenstown Lakes District Council is also seeking additional feedback on proposals made by both Bike Wanaka and Disc Golf Wanaka relating to the new public recreation reserve land at Peninsula Bay. Bike Wanaka propose to plan and develop new mountain bike tracks catering to all levels in the community. It would include an easily accessible, beginners cross-country mountain bike track for all ability levels and ages. Its goal is to create a mountain bike skills development area providing riders with a place to practice in more gentle terrain than offered by Sticky Forest or Lismore Park.

Five new bins have popped up around the district, all for dog poo only and complete with bag dispensers. The bins have been put in on Wanaka’s lakefront, Albert Town’s Gunn Road, Scott’s Beach in Lake Hawea, the Mount Iron track off Allenby Place and the Frankton Track. Senior communications advisor for

Queenstown Lakes District Council Rebecca Pitts said that the new bins had been installed to tackle the ongoing issue of dog poo being left on tracks and trails around the district. “The locations were chosen based on the high number of dog walkers using the areas and them being on already established waste collection routes,” Rebecca said.

The home of Wanaka news, sports, events, and opinions 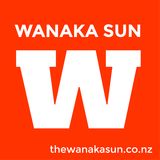