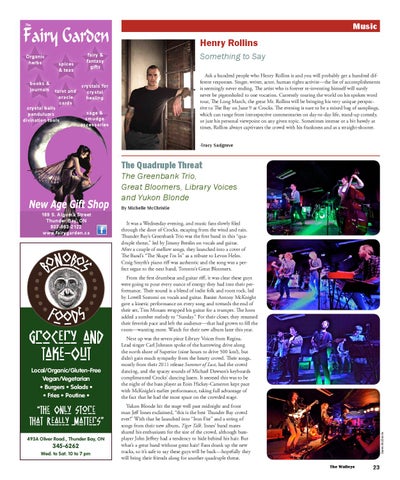 Ask a hundred people who Henry Rollins is and you will probably get a hundred different responses. Singer, writer, actor, human rights activist—the list of accomplishments is seemingly never ending. The artist who is forever re-inventing himself will surely never be pigeonholed to one vocation. Currently touring the world on his spoken word tour, The Long March, the great Mr. Rollins will be bringing his very unique perspective to The Bay on June 9 at Crocks. The evening is sure to be a mixed bag of samplings, which can range from introspective commentaries on day-to-day life, stand-up comedy, or just his personal viewpoint on any given topic. Sometimes intense or a bit bawdy at times, Rollins always captivates the crowd with his frankness and as a straight-shooter.

“The Only Store That Really Matters” 493A Oliver Road., Thunder Bay, ON

It was a Wednesday evening, and music fans slowly filed through the door of Crocks, escaping from the wind and rain. Thunder Bay’s Greenbank Trio was the first band in this “quadruple threat,” led by Jimmy Breslin on vocals and guitar. After a couple of mellow songs, they launched into a cover of The Band’s “The Shape I’m In” as a tribute to Levon Helm. Craig Smyth’s piano riff was authentic and the song was a perfect segue to the next band, Toronto’s Great Bloomers. From the first drumbeat and guitar riff, it was clear these guys were going to pour every ounce of energy they had into their performance. Their sound is a blend of indie folk and roots rock, led by Lowell Sostomi on vocals and guitar. Bassist Antony McKnight gave a kinetic performance on every song and towards the end of their set, Tim Moxam swapped his guitar for a trumpet. The horn added a somber melody to “Sunday.” For their closer, they resumed their feverish pace and left the audience—that had grown to fill the room—wanting more. Watch for their new album later this year. Next up was the seven-piece Library Voices from Regina. Lead singer Carl Johnson spoke of the harrowing drive along the north shore of Superior (nine hours to drive 500 km!), but didn’t gain much sympathy from the hearty crowd. Their songs, mostly from their 2011 release Summer of Lust, had the crowd dancing, and the spacey sounds of Michael Dawson’s keyboards complimented Crocks’ dancing lasers. It seemed this was to be the night of the bass player as Eoin Hickey-Cameron kept pace with McKnight’s earlier performance, taking full advantage of the fact that he had the most space on the crowded stage. Yukon Blonde hit the stage well past midnight and front man Jeff Innes exclaimed, “this is the best Thunder Bay crowd ever!” With that he launched into “Iron Fist” and a string of songs from their new album, Tiger Talk. Innes’ band mates shared his enthusiasm for the size of the crowd, although bassplayer John Jeffrey had a tendency to hide behind his hair. But what’s a great band without great hair? Fans drank up the new tracks, so it’s safe to say these guys will be back—hopefully they will bring their friends along for another quadruple threat.

The May 2012 Issue Featuring: Boarding by the Bay, The Lyceum, Finding Pho, Our Lady Peace, CSA Farms, and much more!

The May 2012 Issue Featuring: Boarding by the Bay, The Lyceum, Finding Pho, Our Lady Peace, CSA Farms, and much more!