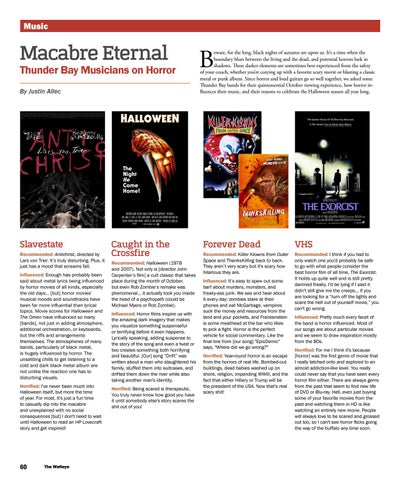 Slavestate Recommended: Antichrist, directed by Lars von Trier. It’s truly disturbing. Plus, it just has a mood that screams fall. Influenced: Enough has probably been said about metal lyrics being influenced by horror movies of all kinds, especially the old days… [but] horror movies’ musical moods and soundtracks have been far more influential than lyrical topics. Movie scores for Halloween and The Omen have influenced so many [bands], not just in adding atmosphere, additional orchestration, or keyboards, but the riffs and arrangements themselves. The atmospheres of many bands, particularly of black metal, is hugely influenced by horror. The unsettling chills to get listening to a cold and dark black metal album are not unlike the reaction one has to disturbing visuals. Horrified: I've never been much into Halloween itself, but more the time of year. For most, it's just a fun time to casually dip into the macabre and unexplained with no social consequences [but] I don't need to wait until Halloween to read an HP Lovecraft story and get inspired!

Caught in the Crossfire Recommended: Halloween (1978 and 2007). Not only is [director John Carpenter’s film] a cult classic that takes place during the month of October, but even Rob Zombie’s remake was phenomenal… it actually took you inside the head of a psychopath (could be Michael Myers or Rob Zombie). Influenced: Horror films inspire us with the amazing dark imagery that makes you visualize something suspenseful or terrifying before it even happens. Lyrically speaking, adding suspense to the story of the song and even a twist or two creates something both horrifying and beautiful. [Our] song “Drift” was written about a man who slaughtered his family, stuffed them into suitcases, and drifted them down the river while also taking another man's identity. Horrified: Being scared is therapeutic. You truly never know how good you have it until somebody else's story scares the shit out of you!

eware, for the long, black nights of autumn are upon us. It’s a time when the boundary blurs between the living and the dead, and potential horrors lurk in shadows. These darker elements are sometimes best experienced from the safety of your couch, whether you’re cozying up with a favorite scary movie or blasting a classic metal or punk album. Since horror and loud guitars go so well together, we asked some Thunder Bay bands for their quintessential October viewing experience, how horror influences their music, and their reasons to celebrate the Halloween season all year long.

Recommended: Killer Klowns from Outer Space and ThanksKilling back to back. They aren’t very scary but it's scary how hilarious they are.

Recommended: I think if you had to only watch one you'd probably be safe to go with what people consider the best horror film of all time, The Exorcist. It holds up quite well and is still pretty damned freaky. I'd be lying if I said it didn't still give me the creeps… if you are looking for a “turn off the lights and scare the hell out of yourself movie,” you can't go wrong.

Influenced: It’s easy to spew out some barf about murders, monsters, and freaky-ass junk. We see and hear about it every day: zombies stare at their phones and eat McGarbage, vampires suck the money and resources from the land and your pockets, and Frankenstein is some meathead at the bar who likes to pick a fight. Horror is the perfect vehicle for social commentary. Like the final line from [our song] "EpicDemic" says, "Where did we go wrong?" Horrified: Year-round horror is an escape from the horrors of real life. Bombed-out buildings, dead babies washed up on shore, religion, impending WWIII, and the fact that either Hillary or Trump will be the president of the USA. Now that's real scary shit!

Influenced: Pretty much every facet of the band is horror influenced. Most of our songs are about particular movies and we seem to draw inspiration mostly from the 80s. Horrified: For me I think it's because [horror] was the first genre of movie that I really latched onto and explored to an almost addiction-like level. You really could never say that you have seen every horror film either. There are always gems from the past that seem to find new life of DVD or Blu-ray. Hell, even just buying some of your favorite movies from the past and watching them in HD is like watching an entirely new movie. People will always love to be scared and grossed out too, so I can't see horror flicks going the way of the buffalo any time soon.

For our cover story this month we’re focusing on Thunder Bay drivers. We head back to class and point out five common mistakes local drivers...

For our cover story this month we’re focusing on Thunder Bay drivers. We head back to class and point out five common mistakes local drivers...