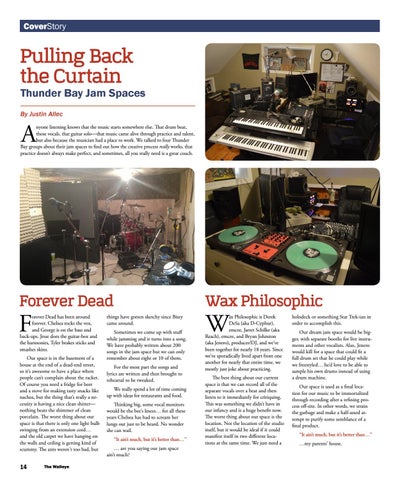 Pulling Back the Curtain

nyone listening knows that the music starts somewhere else. That drum beat, those vocals, that guitar solo—that music came alive through practice and talent, but also because the musician had a place to work. We talked to four Thunder Bay groups about their jam spaces to find out how the creative process really works, that practice doesn’t always make perfect, and sometimes, all you really need is a great couch.

orever Dead has been around forever. Chelsea rocks the vox, and George is on the bass and back-ups. Jesse does the guitar-box and the harmonies, Tyler brakes sticks and smashes skins.

ax Philosophic is Derek DeSa (aka D-Cyphur), emcee, Jarret Schilke (aka Reach), emcee, and Bryan Johnston (aka Jenero), producer/DJ, and we’ve been together for nearly 18 years. Since we’ve sporadically lived apart from one another for nearly that entire time, we mostly just joke about practicing.

Our space is in the basement of a house at the end of a dead-end street, so it’s awesome to have a place where people can’t complain about the racket. Of course you need a fridge for beer and a stove for making tasty snacks like nachos, but the thing that’s really a necessity is having a nice clean shitter— nothing beats the shimmer of clean porcelain. The worst thing about our space is that there is only one light bulb swinging from an extension cord… and the old carpet we have hanging on the walls and ceiling is getting kind of scummy. The ants weren't too bad, but

things have gotten sketchy since Bitey came around. Sometimes we come up with stuff while jamming and it turns into a song. We have probably written about 200 songs in the jam space but we can only remember about eight or 10 of them. For the most part the songs and lyrics are written and then brought to rehearsal to be tweaked. We really spend a lot of time coming up with ideas for restaurants and food. Thinking big, some vocal monitors would be the bee’s knees… for all these years Chelsea has had to scream her lungs out just to be heard. No wonder she can wail. “It ain’t much, but it’s better than…” … are you saying our jam space ain’t much?

The best thing about our current space is that we can record all of the separate vocals over a beat and then listen to it immediately for critiquing. This was something we didn’t have in our infancy and is a huge benefit now. The worst thing about our space is the location. Not the location of the studio itself, but it would be ideal if it could manifest itself in two different locations at the same time. We just need a

holodeck or something Star Trek-ian in order to accomplish this. Our dream jam space would be bigger, with separate booths for live instruments and other vocalists. Also, Jenero would kill for a space that could fit a full drum set that he could play while we freestyled… he’d love to be able to sample his own drums instead of using a drum machine. Our space is used as a final location for our music to be immortalized through recording after a refining process off-site. In other words, we strain the garbage and make a half-assed attempt to purify some semblance of a final product. “It ain’t much, but it’s better than…” …my parents’ house.