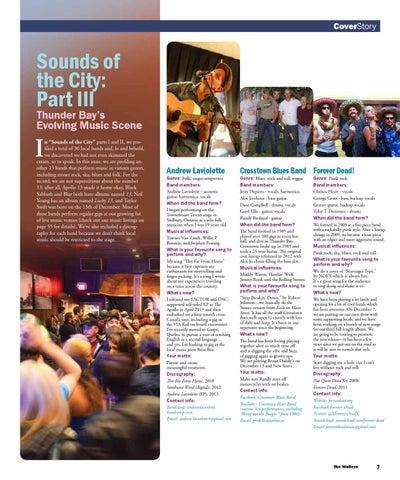 Sounds of the City: Part III

n “Sounds of the City” parts I and II, we profiled a total of 30 local bands and, lo and behold, we discovered we had not even skimmed the cream, so to speak. In this issue, we are profiling another 13 bands that perform music in various genres, including stoner rock, ska, blues and folk. For the record, we are not superstitious about the number 13: after all, Apollo 13 made it home okay, Black Sabbath and Blur both have albums named 13, Neil Young has an album named Lucky 13, and Taylor Swift was born on the 13th of December. Most of these bands perform regular gigs at our growing list of live music venues (check out our music listings on page 55 for details). We’ve also included a discography for each band because we don’t think local music should be restricted to the stage.

Genre: Folk, singer-songwriter Band members: Andrew Laviolette – acoustic guitar, harmonica, vocals When did the band form? I began performing on the Townehouse Tavern stage in Sudbury, Ontario as a solo folk musician when I was 19 years old. Musical influences: Townes Van Zandt, Willie P. Bennett, and Stephen Fearing What is your favourite song to perform and why? My song “This Far From Home” because it best captures my enthusiasm for storytelling and finger-picking. It’s a song I wrote about my experiences traveling on a train across the country. What's new? I released my FACTOR and OACsupported self-titled EP at The Apollo in April 2013 and then embarked on a four-month crossCanada tour, including a gig as the VIA Rail on-board entertainer. I’ve recently moved to Gaspé, Quebec to pursue a year of teaching English as a second language… and yes, I’m looking to gig at the local music joint Brise Bise. Your motto: Pursue and create meaningful moments. Discography: This Far From Home, 2010 Southwest Wind (digital), 2012 Andrew Laviolette (EP), 2013 Contact info: Bandcamp: andrewlaviolette. bandcamp.com Email: andrew.laviolette4@gmail.com

Crosstown Blues Band Forever Dead! Genre: Blues, rock and roll, reggae Band members: Jerry Depiero - vocals, harmonica Alex Jecchinis - bass guitar Dave Campbell - drums, vocals Gord Ellis - guitar, vocals Randy Breiland - guitar When did the band form? The band formed in 1985 and played over 100 gigs in every bar, hall, and dive in Thunder Bay. Crosstown broke up in 1989 and took a 23-year hiatus. The original core lineup reformed in 2012 with Alex Jecchinis filling the bass slot. Musical influences: Muddy Waters, Howlin' Wolf, Jimmy Reed, and the Rolling Stones. What is your favourite song to perform and why? “Stop Breakin' Down," by Robert Johnson—we basically do the Stones version from Exile on Main Street. It has all the stuff Crosstown does well: open G crunch with lots of slide and harp. It's been in our repertoire since the beginning. What's new? The band has been loving playing together after so much time off and is digging the vibe and buzz of gigging again as grown ups. We are playing Beaux Daddy's on December 13 and New Year’s. Your motto: Make sure Randy stays off motorcycles with no brakes. Contact info: Facebook: Crosstown Blues Band YouTube - Crosstown Blues Band (various live performances, including "Bring out the Boogie," from 1986) Email: gordellis@yahoo.ca

Genre: Punk rock Band members: Chelsea Heart - vocals George Gratz - bass, backup vocals Gratzo: guitar, backup vocals Tylor T. Destroyer - drums When did the band form? We formed in 2005 as a five-piece band with a rockabilly punk style. After a lineup change in 2009, we became a four-piece with an edgier and more aggressive sound. Musical influences: Punk rock, ska, blues, rock and roll. What is your favourite song to perform and why? We do a cover of “Scavenger Type,” by NOFX which is always fun. It's a great song for the audience to sing along and shake it to. What's new? We have been playing a lot lately and opening for a lot of cool bands which has been awesome. On December 7, we are putting on our own show with some supporting locals, and we have been working on a bunch of new songs for our third full-length album. We are going to be touring to promote the new release—it has been a few years since we got out on the road so it will be nice to scratch that itch. Your motto: Start digging me a hole ‘cuz I can’t live without rock and roll. Discography: Not Quite Dead Yet, 2008 Forever Dead, 2011 Contact info: Website: forverdead.org Facebook:Forever-Dead Twitter: @XForeverDeadX Soundcloud: soundcloud.com/forever-dead Email: foreverdeadmusic@gmail.com

Our November 2013 Issue Featuring: Sounds of the City Part III- Thunder Bay's Evolving Music Scene, Vinyl Revival, We Will Rock You, A Timel...

Our November 2013 Issue Featuring: Sounds of the City Part III- Thunder Bay's Evolving Music Scene, Vinyl Revival, We Will Rock You, A Timel...