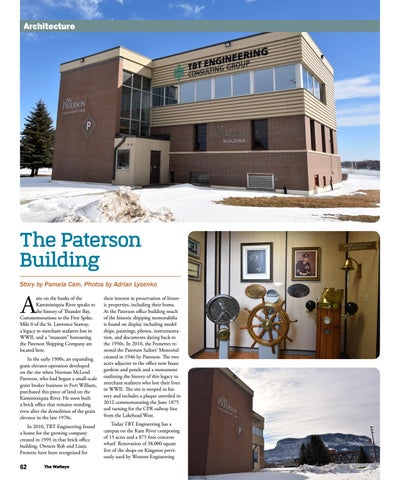 site on the banks of the Kaministiquia River speaks to the history of Thunder Bay. Commemorations to the First Spike, Mile 0 of the St. Lawrence Seaway, a legacy to merchant seafarers lost in WWII, and a “museum” honouring the Paterson Shipping Company are located here. In the early 1900s, an expanding grain elevator operation developed on the site when Norman McLeod Paterson, who had begun a small-scale grain broker business in Fort William, purchased this piece of land on the Kaministiquia River. He soon built a brick office that remains standing even after the demolition of the grain elevator in the late 1970s. In 2010, TBT Engineering found a home for the growing company created in 1995 in that brick office building. Owners Rob and Liana Frenette have been recognized for

their interest in preservation of historic properties, including their home. At the Paterson office building much of the historic shipping memorabilia is found on display including model ships, paintings, photos, instrumentation, and documents dating back to the 1950s. In 2010, the Frenettes restored the Paterson Sailors’ Memorial created in 1946 by Paterson. The two acres adjacent to the office now boast gardens and ponds and a monument outlining the history of this legacy to merchant seafarers who lost their lives in WWII. The site is steeped in history and includes a plaque unveiled in 2012 commemorating the June 1875 sod turning for the CPR railway line from the Lakehead West. Today TBT Engineering has a campus on the Kam River composing of 15 acres and a 875 foot concrete wharf. Renovation of 38,000 square feet of the shops on Kingston previously used by Western Engineering

I’m sure we’ve all got our favourite breakfast restaurant in Thunder Bay. But in case you don’t, you’re in luck. Our March issue is dedicate...

I’m sure we’ve all got our favourite breakfast restaurant in Thunder Bay. But in case you don’t, you’re in luck. Our March issue is dedicate...