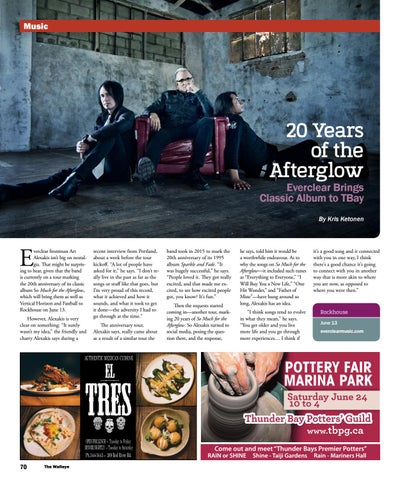 20 Years of the Afterglow

verclear frontman Art Alexakis isn’t big on nostalgia. That might be surprising to hear, given that the band is currently on a tour marking the 20th anniversary of its classic album So Much for the Afterglow, which will bring them as well as Vertical Horizon and Fastball to Rockhouse on June 13. However, Alexakis is very clear on something: “It surely wasn’t my idea,” the friendly and chatty Alexakis says during a

recent interview from Portland, about a week before the tour kickoff. “A lot of people have asked for it,” he says. “I don’t really live in the past as far as the songs or stuff like that goes, but I’m very proud of this record, what it achieved and how it sounds, and what it took to get it done—the adversity I had to go through at the time.” The anniversary tour, Alexakis says, really came about as a result of a similar tour the

band took in 2015 to mark the 20th anniversary of its 1995 album Sparkle and Fade. “It was hugely successful,” he says. “People loved it. They got really excited, and that made me excited, to see how excited people got, you know? It’s fun.” Then the requests started coming in—another tour, marking 20 years of So Much for the Afterglow. So Alexakis turned to social media, posing the question there, and the response,

he says, told him it would be a worthwhile endeavour. As to why the songs on So Much for the Afterglow—it included such tunes as “Everything to Everyone,” “I Will Buy You a New Life,” “One Hit Wonder,” and “Father of Mine”—have hung around so long, Alexakis has an idea. “I think songs tend to evolve in what they mean,” he says. “You get older and you live more life and you go through more experiences… I think if

Our June cover story is all about biking. Starting with those with more experienced and knowledgeable on the topic, writer Bonnie Schiedel c...

Our June cover story is all about biking. Starting with those with more experienced and knowledgeable on the topic, writer Bonnie Schiedel c...