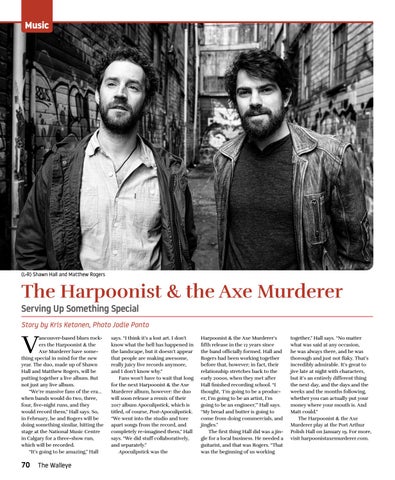 The Harpoonist & the Axe Murderer Serving Up Something Special

ancouver-based blues rockers the Harpoonist & the Axe Murderer have something special in mind for the new year. The duo, made up of Shawn Hall and Matthew Rogers, will be putting together a live album. But not just any live album. “We’re massive fans of the era… when bands would do two, three, four, five-night runs, and they would record them,” Hall says. So, in February, he and Rogers will be doing something similar, hitting the stage at the National Music Centre in Calgary for a three-show run, which will be recorded. “It’s going to be amazing,” Hall

says. “I think it’s a lost art. I don’t know what the hell has happened in the landscape, but it doesn’t appear that people are making awesome, really juicy live records anymore, and I don’t know why.” Fans won’t have to wait that long for the next Harpoonist & the Axe Murderer album, however: the duo will soon release a remix of their 2017 album Apocalipstick, which is titled, of course, Post-Apocalipstick. “We went into the studio and tore apart songs from the record, and completely re-imagined them,” Hall says. “We did stuff collaboratively, and separately.” Apocalipstick was the

Harpoonist & the Axe Murderer’s fifth release in the 12 years since the band officially formed. Hall and Rogers had been working together before that, however; in fact, their relationship stretches back to the early 2000s, when they met after Hall finished recording school. “I thought, ‘I’m going to be a producer, I’m going to be an artist, I’m going to be an engineer,’” Hall says. “My bread and butter is going to come from doing commercials, and jingles.” The first thing Hall did was a jingle for a local business. He needed a guitarist, and that was Rogers. “That was the beginning of us working

together,” Hall says. “No matter what was said at any occasion, he was always there, and he was thorough and just not flaky. That’s incredibly admirable. It’s great to jive late at night with characters, but it’s an entirely different thing the next day, and the days and the weeks and the months following, whether you can actually put your money where your mouth is. And Matt could.” The Harpoonist & the Axe Murderer play at the Port Arthur Polish Hall on January 19. For more, visit harpoonistaxemurderer.com.

For many of us, January is a time to reflect on the previous year and this fits perfectly with our cover story where we present the results...

For many of us, January is a time to reflect on the previous year and this fits perfectly with our cover story where we present the results...