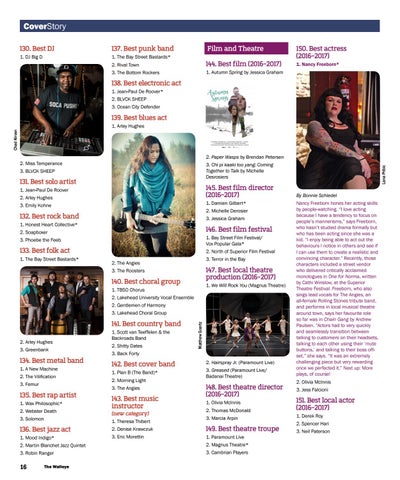 2. North of Superior Film Festival 3. Terror in the Bay

1. We Will Rock You (Magnus Theatre)

Nancy Freeborn hones her acting skills by people-watching. “I love acting because I have a tendency to focus on people’s mannerisms,” says Freeborn, who hasn’t studied drama formally but who has been acting since she was a kid. “I enjoy being able to act out the behaviours I notice in others and see if I can use them to create a realistic and convincing character.” Recently, those characters included a street vendor who delivered critically acclaimed monologues in One for Norma, written by Cathi Winslow, at the Superior Theatre Festival. Freeborn, who also sings lead vocals for The Angies, an all-female Rolling Stones tribute band, and performs in local musical theatre around town, says her favourite role so far was in Chain Gang by Andrew Paulsen. “Actors had to very quickly and seamlessly transition between talking to customers on their headsets, talking to each other using their ‘mute buttons,’ and talking to their boss offset,” she says. “It was an extremely challenging piece but very rewarding once we perfected it.” Next up: More plays, of course! 2. Olivia McInnis 3. Jess Falcioni

3. Chi pi kaaki too yang: Coming Together to Talk by Michelle Desrosiers

Since starting at The Walleye, many times I’ve had readers commend the magazine on how we have our fingers on the pulse of all things arts a...

Since starting at The Walleye, many times I’ve had readers commend the magazine on how we have our fingers on the pulse of all things arts a...