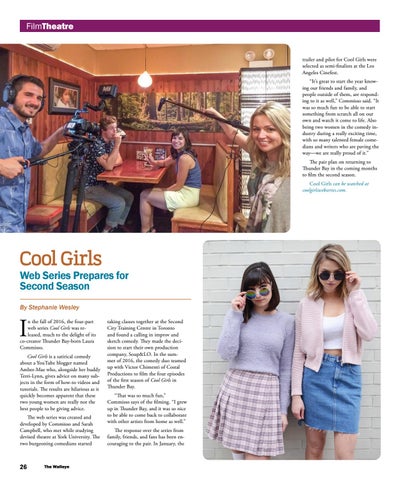 trailer and pilot for Cool Girls were selected as semi-finalists at the Los Angeles Cinefest. “It’s great to start the year knowing our friends and family, and people outside of them, are responding to it as well,” Commisso said. “It was so much fun to be able to start something from scratch all on our own and watch it come to life. Also being two women in the comedy industry during a really exciting time, with so many talented female comedians and writers who are paving the way—we are really proud of it.” The pair plan on returning to Thunder Bay in the coming months to film the second season. Cool Girls can be watched at coolgirlswebseries.com.

n the fall of 2016, the four-part web series Cool Girls was released, much to the delight of its co-creator Thunder Bay-born Laura Commisso. Cool Girls is a satirical comedy about a YouTube blogger named Amber-Mae who, alongside her buddy Terri-Lynn, gives advice on many subjects in the form of how-to videos and tutorials. The results are hilarious as it quickly becomes apparent that these two young women are really not the best people to be giving advice. The web series was created and developed by Commisso and Sarah Campbell, who met while studying devised theatre at York University. The two burgeoning comedians started

taking classes together at the Second City Training Centre in Toronto and found a calling in improv and sketch comedy. They made the decision to start their own production company, Soup&LO. In the summer of 2016, the comedy duo teamed up with Victor Chimenti of Costal Productions to film the four episodes of the first season of Cool Girls in Thunder Bay. “That was so much fun,” Commisso says of the filming. “I grew up in Thunder Bay, and it was so nice to be able to come back to collaborate with other artists from home as well.” The response over the series from family, friends, and fans has been encouraging to the pair. In January, the

Our February issue is devoted to winter sports and activities. From telemark skiing to kick-sledding to ice boating, we take a look at eight...

Our February issue is devoted to winter sports and activities. From telemark skiing to kick-sledding to ice boating, we take a look at eight...